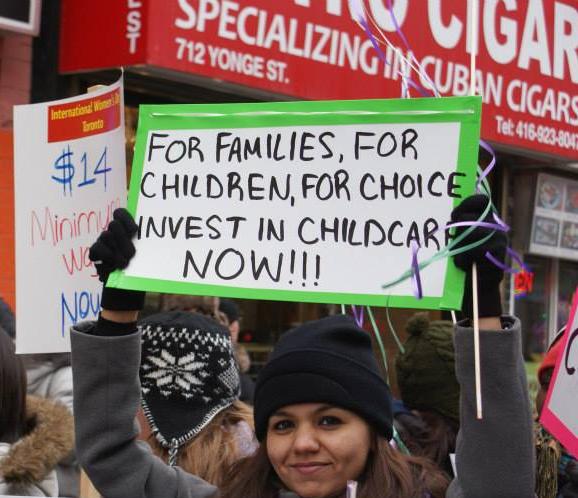 Child care in Ontario has been having a rough ride for some years. Most recently, the current election call illustrates the precariousness of child care in the absence of a federal role and without solid, well-developed provincial policy. In Ontario and Canada-wide, the state of child care is dismal in just about every way - spaces unavailable, quality uneven, wildly varied but mostly unaffordable parent fees, low staff wages, weak regulation. Full-day kindergarten-now in seven provinces-follows schedules that leave child care needs unmet while children younger than five (or four in Ontario) are left out. Integration of kindergarten and child care is at best superficial-not the "strong and equal partnership" we'd hoped for. Suitable inclusive options for children with disabilities are scarce. Many (or most) families rely on unregulated arrangements with no public oversight while quality in regulated child care is often not high enough to be called "developmental".

It goes without saying (again) that Canada has no national child care policy. However, provincial /territorial policy frameworks aren't sufficiently developed either. While some longer-term provincial plans have been developed in the absence of federal resources, compared with families' needs and international benchmarks, these are much too limited. As the Ontario situation shows, the absence of the "glue" of federal policy and financing-coupled with piecemeal provincial policy-leaves child care exceedingly vulnerable to political shifts.

Even before child care's rough ride began in the mid-1990s, hoped-for transformation had failed to materialize under an Ontario NDP government. The 1995-2002 Harris years were lost years, in which child care was plagued by substantial funding cuts, from which it never really recovered. Funding increased again after the slash-and-burn Conservatives were defeated provincially but Stephen Harper's cancellation of the federal Liberals' national child care program in 2006 was another massive setback. In Ontario, expansion plans were cut to one-quarter, while other provinces' plans were curtailed too.

Following the Ontario Liberals' 2007 commitment to full-day early learning, there was considerable discussion about the importance of careful implementation of integration of child care and education. Regrettably, this didn't happen. Full-day early learning became full-day kindergarten (FDK) and child care moved to the back burner. The ride became even rougher as centre budgets crumbled, good quality programs closed their doors (including many municipal centres and 13 lab centres at ECE training colleges), parent fees rose, subsidy wait lists mushroomed, and wages stagnated. There were some transitional funds but FDK was phased-in with inadequate policy or funds to support and develop child care. A new rough and wild roller coaster ride began.

In 2012 and 2013, several tragic deaths in unregulated child care captured public attention. The first of two outcomes was that as part of new legislation covering other needed changes, the Ontario government moved to close some legal loopholes that had long facilitated operation of unregulated care. Tabled last December, Bill 143 was mostly welcomed by the child care community and was in second reading at the election call. A second consequence, however, of the new sensitivity to the perils of unregulated child care was a provincial proposal to "increase" regulated spaces by reducing staff: child ratios below those recommended by experts. The child care community waged a concentrated campaign against this new threat to quality. In response, the ratio reductions were taken off the table, at least temporarily.

During the campaign against the ratio reductions, a recurrent theme was child care staff's low wages that are-in effect-subsidizing services. So although other issues remained, there was considerable excitement in the child care community when the Ontario government committed to funding in the provincial budget earmarked for raising staff wages. This would have been the first public funding for wages that Ontario's underpaid and beleaguered child care workforce had seen in many years.

Thus, with the election call, child care's rough and wild ride continues-no legislation, no wage increase and policy limbo with regard to coherent policy and adequate funding. Despite all the talk about the "importance of the early years", supporting families, women's equality, the middle class, poverty and inequality, none of the political parties has articulated a position that commits to making child care an integral part of a 21st century society.

As the record on Canadian federalism shows, collaboration between the federal government and provinces/territories is needed to establish child care firmly enough to make it harder to cancel advances or abruptly change direction at the drop of a writ. If Canada is to do better for families than the current shifting fragile patchwork of services, we do need that well-designed national child care policy we've talked about for so many years. This would provide the federal "glue" to build a system that would eventually ensure that "choice" means that all parents are able to choose among various affordable high quality services (and policies like improved parental leave) to fit their situations.

At the same time, we also need the provinces and territories to develop their own coherent long -term child care policies so that initiatives don't rise or fall at the whim of an election call or change of government. Although this isn't merely an Ontario problem, (as similar fits, starts and rough rides can be detailed in many other provinces) a good start on this in Ontario would be now-with this provincial election. The place to start is with all parties stating clear positions on child care including recognition of several immediate, pressing considerations.

First, all political parties wishing to form the next Ontario government should commit to developing a robust, long-term, evidence-based ECEC policy framework with principles, goals and targets, timetables and sustained financial commitments-this is long overdue. Second, the proposal to cut staff: child ratios remains an outstanding concern. All parties should commit to setting these aside; key regulation changes like these should be considered together with other policy elements, not piecemeal.

Funding issues are also pressing. Ontario child care is severely underfunded. Aspiring Ontario governments should commit to new child care money in a first budget in addition to wage increases. A fund of $300 million could address immediate crises such as, for example, cuts to selected municipalities, centre viability, municipal subsidy waiting lists, family child care agency funding. In addition, reintroducing the promised wage increase will be a welcome first step to real changes in the status of the workforce in a modernized child care system. With regard to the child care legislation that died with the election call, the party forming the next Ontario government should retable it and continue the normal legislative and public process of debate, comment, amendment and passage.

Finally, as child care is a key national issue, a Premier with a commitment to families, children and women's equality should strive to lead nationally on child care. Ontario party leaders should commit to taking future leadership with fellow premiers and the federal government to put a national child care program with substantial federal funding and an overarching policy framework back on the agenda.

These first steps would be a good way to begin to end child care's rough ride.