A national child care program: Not now, after all 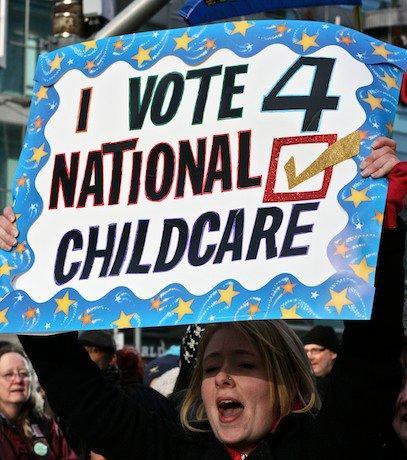 Four more years... For those of you who - like me - believe that a national approach is necessary if Canadian families are ever going to win high quality accessible early childhood services, the federal election results are a bitter pill to swallow. There is no doubt that the 2006 cancellation of the hard-won bilateral Early Learning and Care agreements by the minority Conservative government set child care back five years. Now, with a majority government with a reluctant attitude to early childhood education and child care in place for a four year fixed term, careful strategic thinking about challenges and opportunities is more important than ever.

Some preliminary thoughts to generate debate:

While we haven't won the Canada-wide national child care program we have been seeking since the 1970s, much has been achieved. Early childhood education and care (ECEC) has become a mainstream issue, desired by young parents and supported by the public and by many policymakers and allies gained in the last decade or so. The prominence of child care in the 2011 election is one illustration of this: Code Blue for Child Care pointed out in an election platform report card that four of the five main parties (supported by a majority of voters) were clear child care supporters.

While aversion to child care may be hard to take in 2011, it's really nothing new. In fact, absent government appetite (both federally and provincially/territorially) for improving the lives of families and children has been the reality for much of the last thirty years of child care advocacy. A pragmatic long-term appraisal shows that - in spite of the fragile situation of Canadian ECEC - much has been achieved that provides a solid underpinning for ongoing advocacy.

Now is the time to build solidarity

Solidarity and coalition-building has long been a strength of the Canadian child care movement with its unique history of cross-sectoral solidarity among feminist, labour, social justice, education and child care groups, researchers and advocates.

Last spring, early childhood policy expert Helen Penn - writing in a British ECEC magazine about an Ottawa early childhood policy forum she attended - noted the "optimism and energy" when "the outlook is bleak and the likelihood of change is minimal". She pointed to the considerable collegiality and camaraderie across sectors, experience and age-cohorts and the "inspiring level of discussion" as encouragement for UK ECEC advocates.

Post-2011 election is a good time to keep in mind our tradition of solidarity, and to build on it in new ways.

The Canadian child care movement has always been both "pan-Canadian" and "provincial/ territorial", focusing on both senior levels of government as is necessary given the mechanics of Canadian federalism. While the federal government is key in ensuring that social programs touch all regions of Canada, provinces/territories are of fundamental importance as they hold the jurisdictional responsibility for social programs.

Current interest across Canada among (some) provinces/territories in ECEC offers multiple possibilities -as well as challenges -for strengthened cross-Canada advocacy and making gains in the short term.

The new Parliament of 2011 may be lead by an ECEC-averse majority government but boasts an empowered NDP Official Opposition with a long history of vigorous child care advocacy; a Liberal caucus which, though weakened, has considerable multi- election experience with ECEC as a leading issue; and a first-time seat win for the Green Party. At the same time, the Canadian Labour Congress - a leading partner in child care advocacy - has adopted a powerful resolution and commitment at its May Convention to campaign and work with child care movement partners towards "non-profit, public, high quality, accessible, inclusive, and affordable" child care.

These -- together with provincial/territorial interest, a child care movement with a thirty year history, public support for ECEC as a mainstream issue and our own well-developed policy positions -are significant assets.

Keep in mind what we stand for... and why

Child care debate in Canada has long been based on well-defined advocacy principles: ECEC should be treated as universal, not targeted; it should be well supported with public funding; the ECEC "system" should be made up of not-for-profit and public programs; a well-paid, well-educated, well-respected workforce is fundamental to a high quality ECEC system; "education" and "care" should form a "strong and equal partnership"; and democratic principles such as inclusion, respect for diversity and democratic participation should underpin a Canadian ECEC system. Historically, government policy development has been challenged, informed and extended by the policy development of the child care movement.

Over the years, the rationales for our basic child care advocacy principles have been strengthened through research, analysis and observation. While refining, evolving, and adapting to change have been - and should continue to be - ongoing, this would be a good time to reaffirm our basic principles and commitments, keeping in mind how and - especially -why we arrived at them in the first place

Over the next few months, the broad "we" who make up the Canadian child care movement will be discussing these and other ideas with our colleagues - as well as with those who are less supportive (and even those who are not supportive at all) as we figure out what the next four years holds.