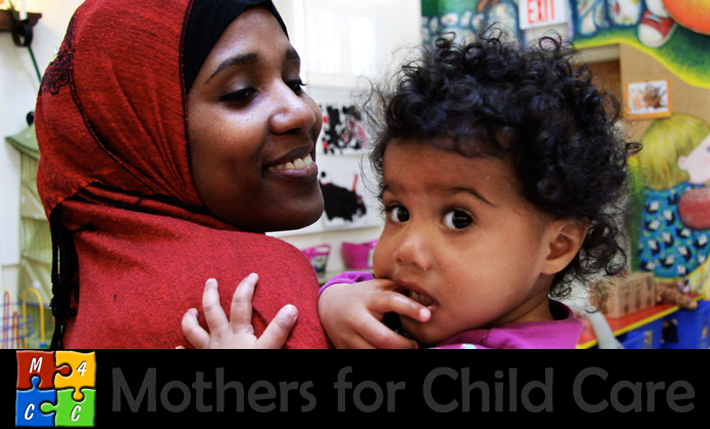 Not to put too fine a point on it, but the mountain of evidence about the value of good child care should be more than enough to convince Canadian policy makers to act - if there's any interest out there in evidence-based policy making. Early childhood education and care (ECEC) has been studied from the perspective of child development and early educational advantage, anti-poverty, balancing work and family, human rights/children's rights, women's equality and smart economics. New studies looking at child care every which way appear with exasperating regularity.

But few analyses have asked mothers of young children what they need, what's missing and what they think should be done about child care.

The Toronto-based Mothers Task Force set out to do just that. The Task Force - made up of community groups and young mothers - held public meetings and circulated an online questionnaire asking a few key questions: what mothers' experiences with child care and the subsidy system are like, what things are important to them about child care, how they pay (or can't pay) for child care, and what they think should be done. (Declaring my own conflict-of-interest: I worked with the group to help design the questionnaire.)

The Mothers Task Force report "I should have applied before I was pregnant": How child care in Toronto fails mothers is dynamite. Coming straight from the "horse's mouth" - the mothers themselves - it has the ring of authenticity. The responses of the almost-1000 moms (and a few dads) who answered the questions and added their own words are an indictment of Canadian policy makers for failure to support them as mothers, workers, students and citizens.

High unaffordable fees, no availability, concerns about quality, no spaces for children with special needs, work and study opportunities missed for newcomers to Canada and those who were born here - this is the story of child care in Toronto. The individual comments are notable: "My child's daycare is more expensive than my mortgage. It's over $1500/month...obviously paying 2 mortgage payments a month puts a considerable strain on my family finances making purchasing clothing and food more difficult".

Another mother wrote in: "When I got called for the subsidy interview, I still could not find child care space for my child and therefore the city put my child back on the waiting list again. By the time the day care centre called us for an open spot, the city did not have the funding for us. So when the city is ready again, the day care centre may not have an open spot as they give the spot to the next available family..."

This isn't just the story in Toronto though. Studies like this in communities in most regions in Canada would reveal the same issues and shortcomings - and this is true across provinces governed by the range of political parties. In the last few weeks alone, ECEC stories featured in the media across Canada include: in New Brunswick, a seasoned advocate and city councilor warned against encroaching "big-box babysitting"; in BC, a mom is No. 712 on a centre waiting list; in Edmonton the city is reducing requirements for outdoor play space to make it easier (cheaper) to open a centre; also in Edmonton, the owner of an unlicensed home day care operation was charged with multiple counts of sexual assault; in Calgary, Canada's new poster-child child care corporation reported its cash gains; and in Toronto, eminent Quebec economist Pierre Fortin, presented research detailing how publicly-funded Quebec child care not only pays for itself but contributes millions of dollars to the federal government's money-box. (Perhaps this is the very money-box out of which the up-coming tax break for corporations will be paid)..

The Mothers Task Force project tells it how it is and what's needed - not mythical "choice in child care" delivered through the mail-box, not "full-day early learning" which is more ephemeral than real, and not measuring out small improvements in coffee spoons, while mothers in provinces like Nova Scotia and Saskatchewan experience a child care jungle similar to Toronto's.

What we know from experience and comparative research is that only governments can ensure the high quality accessible child care that families and children so desperately need. The Toronto Mothers' Task Force project has designed a great tool to bring new evidence about this from a previously understudied "stakeholder" - mothers of young children - to national, provincial and local policy makers. The report is a good read, filled with strong, direct evidence that could be extremely useful for shaping child care policy.

Policy-making based on evidence - now that would be a novelty in today's Canada!