Ontario’s Ministry of Education is proposing changes to child-care regulations that would allow operators to group infants and toddlers together, reduce staff-to-child ratios for some age groups and lower qualification requirements for staff.

Child-care advocates said the proposed changes would make child care worse, not better, and they criticized the government for releasing the proposal in the middle of a pandemic, when parents are stressed and many operators are just trying to stay afloat.

“People are pushed to the limit and very distracted,” said Carolyn Ferns, a spokesperson for the Ontario Coalition for Better Child Care. “To have something like this come along at a time when the sector is very vulnerable, very distracted and not able to mobilize … I think it’s opportunistic and sneaky.”

The proposed amendments to the Child Care and Early Years Act, quietly posted on the government’s website on Oct. 2, arose as a result of a scheduled five-year review of the Act. The ministry is soliciting feedback from “all interested parties” by Nov. 20.

Among the proposed changes to age categories is combining infants and toddlers into one group. Infants and toddlers are currently grouped by 0-to-18-months and 18-to-30-months, respectively; the new combined group would be 0-to-24-months.

The biggest impact would be for children between 24 and 30 months old. Under the current system, they’re considered toddlers, and required to have a 1-to-5 staff-to-child ratio and a maximum group size of 15.

Under the proposed changes these children would be bumped up into the preschool category with children up to five years old, and they would have a 1-to-8 staff ratio and a maximum group size of 24. “That’s a pretty big change for those two-year-olds,” Ferns said.

“Best practice is always going to say that we want more staff for fewer children, not more children for fewer staff,” he said, adding that grouping two-year-olds with children up to five is “not the norm” in Canada. “Typically a two-year-old is very much considered a toddler.”

In a written response to questions for this story, Ingrid Anderson, a spokesperson for the Ministry of Education, said the changes to age categories were proposed because “greater continuity of care during (a child’s) first years is associated with reduced stress and stronger relationships between educators, children and parents.”

A child’s “developmental progression” varies widely, Anderson said. “Allowing educators and parents to make decisions on when children are ready to progress to the next age group is beneficial for children’s learning and development.”

The proposed changes do not seem to allow children to progress to the next age group based on their development, rather than their age, so it’s not clear what Anderson meant by this. She did not respond to a request for clarification. The ministry is soliciting feedback on possibly allowing overlapping age categories in the future, but that is not one of the proposed amendments.

Anderson said findings from an industry survey and conversations with “sector partners” indicated the need for “more flexibility in (staffing) ratios so that licensees could move children between programs based on their developmental needs.”

The Association of Day Care Operators of Ontario, which represents both for-profit and non-profit child-care centres, declined to comment.

This marks the fourth time in the last decade that the province has proposed changes to age categories and staff ratios. The previous Liberal government under Kathleen Wynne proposed similar changes in 2016, but withdrew their proposal when it was met with widespread backlash from parents, advocates and academics.

One difference with the current proposal is that it would be optional for operators to adopt the new age categories, and they would have to apply to the ministry to do so.

Ferns said that since it would be cheaper for child-care operators to use the new age categories and staffing ratios, many would.

“Because we’re in this situation where we have this market model and centres have this financial pressure on them, decisions are made for the wrong reasons,” she said. “We’re not doing it because that’s what’s in the best interests of the child. Is it good for a toddler to be put into a larger group with fewer staff? No, of course not, and we wouldn’t be making that decision if it wasn’t for financial reasons.”

The ministry’s proposed changes also include removing the requirement that staff working with kindergarten-age children be members of the College of Early Educators; allowing non-qualified staff to temporarily fill in for qualified staff for up to two weeks; and requiring that a supervisor have two years’ experience in “general children’s programming,” rather than licensed child care specifically.

“We understand that operators are in a very tough position, but this isn’t the way to solve those problems,” she said. “We really have to get at the root of the issues, which is the wages and working conditions in the sector.”

Coming little more than a week after a throne speech in which the federal government signalled its intention to build a national child-care system, the province’s proposal is deflating, Ferns said. 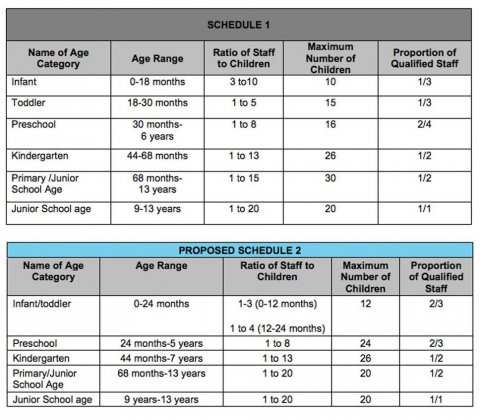 “They’re not speaking to the moment that we’re in,” she said. “We’re actually at a place in Canada now where we’re talking about making substantial changes to child care. We could be moving forward in a really positive way to expanding licensed child care, to building a system that would be more affordable for families, that would provide some stability for centres, not through tweaking how many kids they can shoehorn into a room, but by actually building a quality, publicly funded child-care system.”