Parents, child-care advocates and City of Toronto staff delivered a forceful rejection on Thursday to the province’s proposed changes to child-care regulations, which were made public last month.

In two separate reports — one by city staff and the other by the Ontario Coalition for Better Child Care and the Association of Early Childhood Educators — there was unanimous opposition to the proposed changes, which include allowing child-care operators to group infants and toddlers together, reduce staff-to-child ratios for some age groups and lower qualification requirements for some staff.

“This is exactly the wrong thing that we need right now,” said Carolyn Ferns, public policy co-ordinator for the Ontario Coalition for Better Child Care, in a virtual news conference Thursday morning. “It’s about the opposite of what’s needed.”

The proposed changes, posted to the government’s website on Oct. 2, arose as a result of a scheduled five-year review of the Child Care and Early Years Act. Ontario’s Ministry of Education is soliciting feedback on the proposal until Nov. 20.

If the proposed changes are adopted, child-care operators would be allowed to apply to the ministry to follow a new set of age categories. Among the most controversial proposals is one that would allow infants and toddlers — currently separated into 0-to-18-months and 18-to-30-months groups — to be combined into a single 0-to-24-months group. 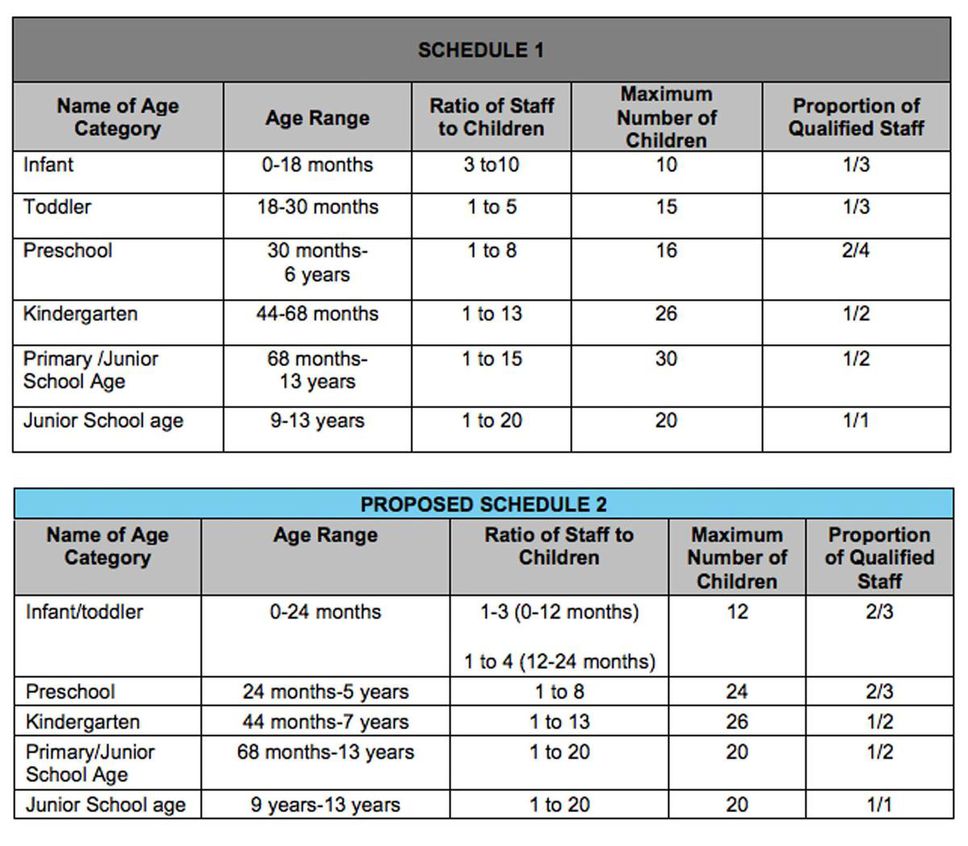 The proposed changes would also lower the staff-to-child ratios and increase the maximum group sizes for some age categories. The ministry says the proposal will increase the number of child-care spaces in the province and provide more flexibility for operators.

“Taken together, the changes would have a negative impact on quality, and would undermine efforts to raise the bar on the reputation of the profession of early childhood education,” reads the report from city staff, which was adopted by the Economic and Community Development Committee on Thursday.

Speaking to the staff report at Thursday’s committee meeting, Shanley McNamee, the city’s general manager of children’s services, said the province’s proposed lower staff-to-child ratios would put “more demands on an already struggling workforce” and also negatively impact the quality of child care and “potentially the health and safety of the children.”

McNamee also said city staff opposed grouping infants and toddlers together from a developmental perspective. “A three-month-old infant potentially in the same room with a two-year-old, we feel it would be very challenging for staff to actually meet their needs.”

The city conducted online surveys with more than 2,000 parents and child-care service providers to produce the report, in which they also express concern about the timing of the proposed changes — in the middle of the COVID-19 pandemic and also shortly after the federal government signalled its intention to build a national child-care system.

“With a national system and investment on the horizon,” the staff report reads, “now is not the time for regulatory changes that may destabilize an already struggling sector.”

Coun. Joe Cressy, who along with Coun. Mike Layton put forward a motion last month that led to the staff report, said what the province is proposing would reduce the quality of child care.

“It’s that simple. If these changes go ahead, we will have diminished child care in our province,” Cressy said. “The changes the province has quietly proposed in the midst of COVID — no less — will mean more kids, fewer staff and weaker standards.”

The Ontario Coalition for Better Child Care and the Association of Early Childhood Educators conducted its own survey of more than 2,400 parents and early childhood educators about the proposed changes, and 90 per cent of respondents opposed combining infants and toddlers, while more than three-quarters of respondents opposed all the changes to age categories and staff ratios.

“There was absolutely no research base presented by the government to make these changes,” Ferns said. “We know what’s needed. We need more funding and support for child-care centres. We don’t need deregulation.”

This marks the fourth time in the last decade that the province has proposed changes to age categories and staff ratios. The previous Liberal government under Kathleen Wynne proposed similar changes in 2016, but withdrew their proposal when it was met with widespread backlash.

“This is Groundhog Day for the child-care sector,” said Layton. “Every couple of years, the provincial government proposes these very same changes under the guise of streamlining the process and giving more options. The reality is it’s trying to move towards a model that has more private sector involvement and has less supervision for children.

“They care less about kids and more about making the process easier for operators, particularly private operators.”

The ministry’s proposed changes would also remove the requirement that staff working with kindergarten-age children be members of the College of Early Educators; allow non-qualified staff to temporarily fill in for qualified staff for up to two weeks; and allow a supervisor to have two years’ experience in “general children’s programming” rather than licensed child care specifically.

Alana Powell, executive co-ordinator of the Association of Early Childhood Educators of Ontario, said the proposed changes were an “insult” to early childhood educators.