Canada’s two largest provinces are grappling with whether to extend winter school breaks as Quebec and Ontario continue to set records for COVID-19 infections.

In Quebec, schools have accounted for about 20 per cent of new COVID-19 cases in each of the past two weeks. The case count in Ontario, meanwhile, has been persistently high, with the province recording 1,575 new infections on Thursday, increasing exposure for students and staff.

Provincial governments have been reluctant to close schools, even temporarily, pointing to the social and emotional well-being of children. However, as the pandemic caseload in communities increases, educators and public-health officials worry how this will affect classrooms.

In Ontario, the heads of school boards are calling on the province to extend the winter break for students and staff.

Quebec’s Premier François Legault told reporters on Thursday that an extended closing around the winter break was being considered, but he emphasized his reluctance to take such a drastic step. He said that more than 1,100 classrooms are currently closed, but, more significantly, 324 of the closings came in the past two days.

“The last places we want closed are schools,” he said.

Quebec has had some of the country’s most restrictive pandemic measures since early October, including limiting gatherings and closing indoor and outdoor dining. The restrictions have slowed the spread of the virus but have not driven infections down to levels seen in the summer.

The discussions around school closings in Quebec may portend what other parts of the country could soon have to confront as COVID-19 surges in Ontario and Western Canada.

Schools across the country abruptly closed their doors to in-class instruction in the spring as the first wave of the pandemic hit, leaving many families struggling with online learning. When schools opened this fall, provinces put in place different levels of health and safety measures, and Ontario, in particular, provided families with the option of virtual learning.

Tony Pontes, executive director of the Council of Ontario Directors of Education, said on Thursday that his organization has spoken to the province’s Ministry of Education about extending the winter break so staff and students would not return to school buildings on Jan. 4.

“It’s only discussion at this point, but the directors have expressed concern and recommended that the ministry consider either a few days or in fact the whole week,” Mr. Pontes said in an interview, adding that the heads of school boards are suggesting that students would learn virtually during that period.

He said that directors are worried about students and staff who may gather with their families over the December holidays and then return to school just days later. With a bit of time between the holidays and the reopening of schools, “hopefully if someone is symptomatic, they would discover that before they come back to school,” Mr. Pontes said.

He said that the ministry has acknowledged the concern and is considering the request. 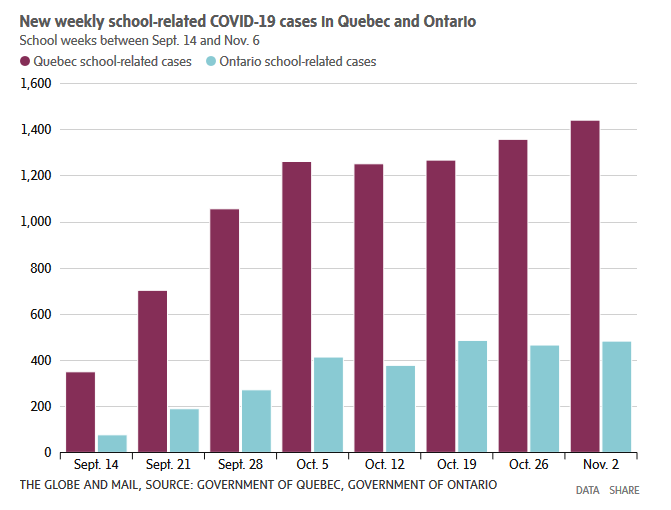 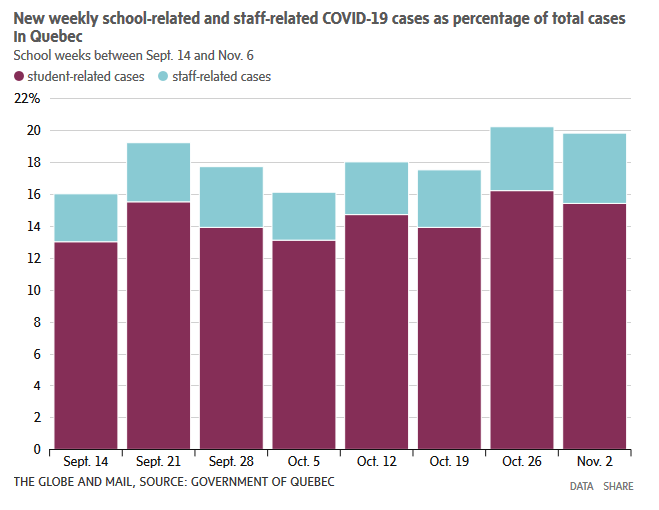 Lawrence Loh, the Medical Officer of Health in Peel Region, west of Toronto, said cases in schools have been a reflection of community transmission rather than a driver of them. Infection rates in Peel have climbed rapidly.

“If you throw enough cases at the school system, and if our case counts continue to rise, then there will need to be some sort of reckoning,” Dr. Loh told reporters on Thursday. “We need to really limit our interactions, get this under control, because ultimately schools are one of the last things that we want to close knowing that many students benefit … from being in that setting.”

Caitlin Clark, a spokeswoman for Ontario’s Education Minister Stephen Lecce, said the government has not considered any modification to the school-year calendar. “Our focus remains on doing everything we can to keep students and educators safe, while keeping schools open and students learning in person,” she said.

Still, a memo from the deputy minister of education, Nancy Naylor, to school board directors in October asked them to be ready for a possible move to remote learning should cohorts of students or entire schools move into self-isolation.

“To be prepared for a potential closure, school boards should have plans in place so they can move to remote learning quickly,” Ms. Naylor wrote in the memo, a copy of which was obtained by The Globe and Mail.

She added: “The continuity of learning is paramount to provide stability and consistency in the lives of our students.”

Manny Figueiredo, the director of education for the Hamilton-Wentworth District School Board, said his board sent a survey to families asking if they had devices and internet services should classrooms or schools move to remote learning.

“We are asking families to assess their preparedness to have students learn from home should a school close due to an outbreak or in the event the Ministry of Education directs us into a full remote-learning scenario,” Mr. Figueiredo said.

With a report from Chen Wang