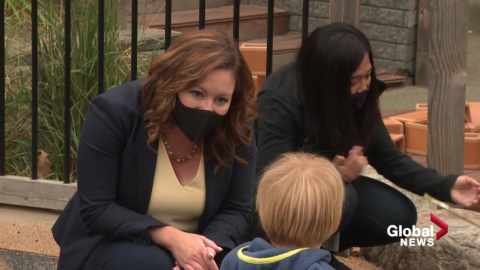 Alberta child-care advocates are celebrating the federal government’s commitment Monday to bring the cost of childcare down to more affordable levels Canada-wide, saying it will allow more Albertans to get back into the workforce, helping to bolster the struggling economy.

The 2021 federal budget was announced Monday afternoon and is expected to push the country’s debt past the $1 trillion mark as the government works toward a financial rebuild of the economy crushed by the COVID-19 pandemic.

It also contains big promises to make childcare more accessible for parents across the country, with Finance Minister Chrystia Freeland committing to bringing childcare fees to an average of $10 a day in regulated centres by 2025-26, at a cost of $30 billion over the next five years.

“Without childcare, parents — usually mothers — can’t work,” Freeland said, as she presented the first federal budget tabled by a woman.

“The closing of our schools and daycares (amid the pandemic) drove women’s participation in the labour force down to its lowest level in more than two decades.”

Jennifer Usher with the Association of Early Childhood Educators of Alberta called the announcement “an amazing thing for families here in Alberta, especially for women.”

The previous NDP government launched a pilot program in Alberta that provided $25-a-day childcare at select centres across the province.

The current UCP government decided not to renew that program, which ended on April 1. Instead, Jason Kenney’s government pledged grants for daycares and day homes in Alberta, saying it would increase available spaces while ensuring vulnerable families using some centres offering the $25-a-day option weren’t overlooked.

“Those are the ones that have really been impacted by $25-a-day daycare that we had here in Alberta.”

‘Living below the poverty line’

ABC Head Start Society in Edmonton was part of the NDP pilot program and said families who took advantage of the program were very happy to have the access. The centre also had a waitlist of parents wanting an affordable spot for their child.

“We served the families who otherwise couldn’t afford childcare or an early learning program for their families, and we see the impacts this has on their life. It allows them to go back into the workforce,” Christi McTaggart with the society said Monday.

“Economically right now, with the price of childcare, it’s really hard for families to afford that if they’re already living below the poverty line.”

Edmonton mother Marissa Schmidt’s two-year-old was in a $25-a-day daycare spot until the program ended.

“For us, when that program ended, our monthly fees doubled. It’s huge,” she said.

Schmidt said many women are forced out of the workforce either because they can’t afford to put their children in daycare or because it makes more sense financially for mothers to stay at home instead of paying for childcare.

She said while her family can afford to keep sending their daughter, and possibly one or two more children, to daycare, $10-a-day daycare would be “financially freeing” for families.

“Then there’ll be more disposable income for families to contribute to the economy. There are just so many benefits to it,” she said.

Speaking Monday afternoon, Alberta Children’s Services Minister Rebecca Schulz said she “welcomes” the investment in childcare, but added: “What I really want to make sure is that there’s flexibility so that we can meet the unique needs of Alberta childcare operators and Alberta parents.”

Schultz said currently in Alberta, more than 60 per cent of child-care centres are privately owned, and only one in seven parents enroll their children in licensed daycares.

“The $25-a-day pilot really only benefited less than a percent of Alberta parents,” she said.

“Let’s put that into context: to expand a universal program right across Alberta would cost more than $1 billion.

“We have the highest childcare subsidies currently in the country outside of Quebec. We also invest the highest wage top-ups for early childhood educators.”

The $10-a-day universal childcare initiative would have to be accepted by every province in Canada for it to be successful. Schulz wouldn’t say whether the Alberta government would support the plan announced by Freeland, adding the province needs more details from the federal government.