After decades of broken promises and half measures on child care, Finance Minister Chrystia Freeland announced today the federal government will invest roughly $30 billion over five years to help offset the cost of early learning and child care services.

This federal investment — the single largest line item in the massive 739-page budget document tabled today — is designed to significantly reduce what parents pay for care in the coming years. The government's stated goal is to make life more affordable and to drive economic growth by drawing more women into the workforce.

The federal government estimates the COVID-19 pandemic has driven at least 16,000 women out of the job market altogether, while the male labour force has grown by 91,000 over the same period.

Another recent analysis by RBC found that almost half a million Canadian women who lost their jobs during the pandemic still hadn't returned to work as of January. Employment among women in Canada who earned less than $800 a week has fallen almost 30 per cent, the bank reported.

Freeland said this child care investment will help counter some of the gender disparities fuelled by the pandemic crisis.

Freeland said that, as result of the new spending, the next 18 months could see a reduction of up to 50 per cent in the average child care fees paid by parents. With child care expenses running nearly as high as rent or mortgage payments in some cities, the household savings could be significant.

Median monthly cost of daycare in 2020 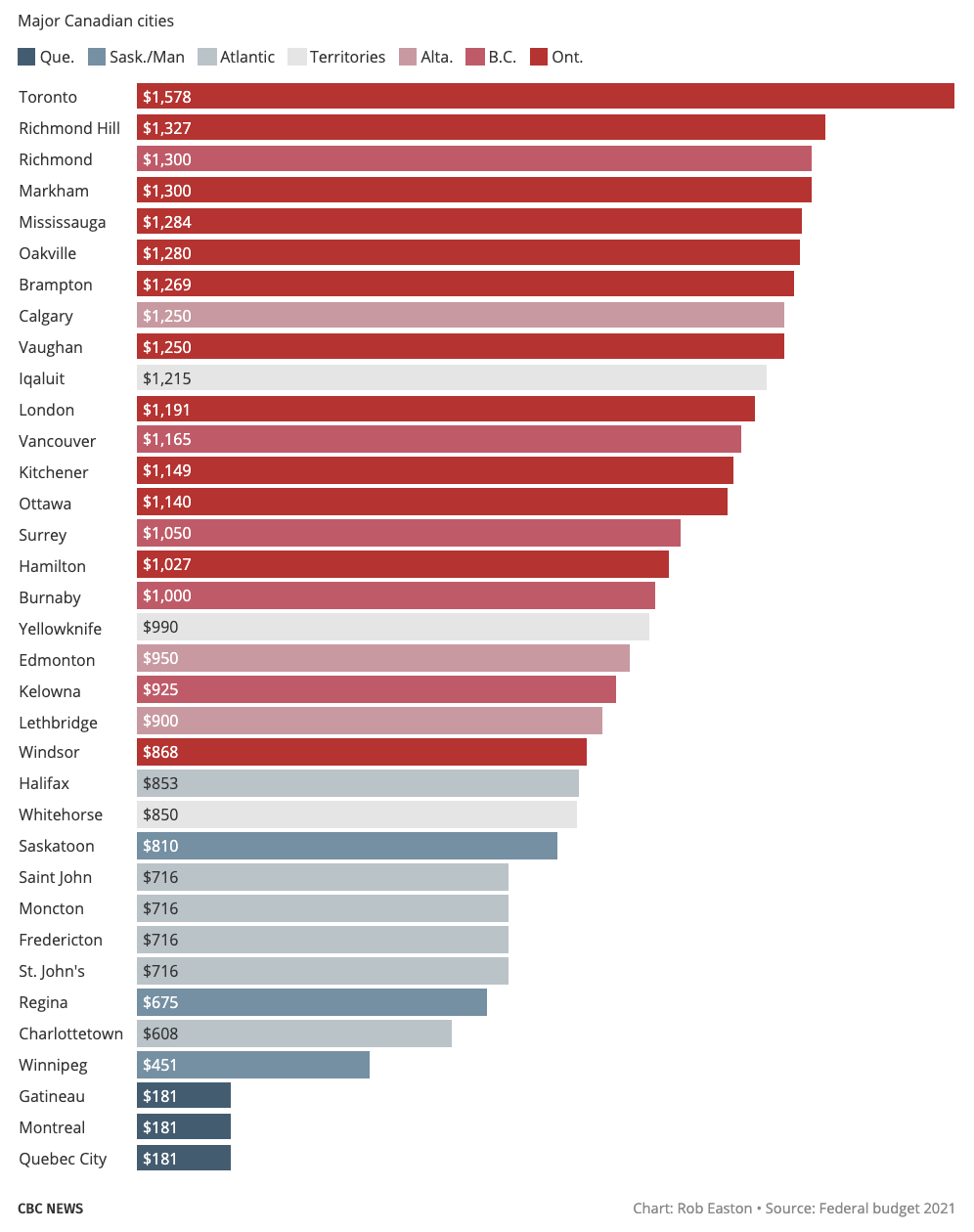 Freeland said such an affordable child care system could increase the overall size of the economy — as measured by the gross domestic product (GDP) — by some 1.2 per cent.

"It's expensive, but it's an investment worth making," she said.

Of the $30 billion promised today, $27.2 billion will be used to "bring the federal government to a 50/50 share of child care costs with provincial and territorial governments," says the budget document.

The government's stated goal is to drive down child-minding costs within five years to just $10 a day per child, nationwide — significantly less than what most working parents pay now in all jurisdictions outside Quebec.

The budget earmarks another $2.5 billion for the Indigenous early learning and child care system — to create new spaces, to build or renovate existing centres and to support after-school care programs on-reserve.

The budget also sets aside money to make over 400 existing child care centres nationwide more accessible for children with disabilities.

After that initial $30 billion has been spent, the government says it will allocate $8.3 billion a year in new program spending — nearly eight times more than what the federal government spent on child care last year — to make child care a permanent fixture of the country's social safety net.

That money is to be used to lower costs, create new spaces and hire more early childhood educators to bolster the quality of care in years to come.

'We will get it done': Freeland

In Quebec, where parents already pay less than $10 a day for care, the TD study suggests that for every dollar invested in child care, between $1.50 and $2.80 "comes back to the broader economy."

Before the implementation of the Quebec Educational Childcare Act in 1997, the labour force participation rate for women in Quebec was four percentage points lower than in the rest of Canada.

Today, that rate is four points higher than the Canadian average. Quebec women now have some of the highest employment rates in the world, Freeland said.

A senior government official, speaking on a not-for-attribution basis during a technical briefing for reporters, said Quebec would see some of the $30 billion in child care spending but the details of that "asymmetrical agreement" will be worked out at a later date.

In her budget speech in the House of Commons, Freeland said she was determined to build this nationwide "social infrastructure" after previous attempts failed.

"I make this promise to Canadians today, speaking as your finance minister and as a working mother — we will get it done," she said.

Freeland said the child care program will not materialize overnight. Ottawa will have to negotiate the program with the provinces and territories because child care is principally a provincial responsibility.

"This is not an effort that will deliver instant gratification. We are building something that, of necessity, must be constructed collaboratively, and for the long-term. But I have confidence in us," Freeland said.

The Liberal plan got a thumbs-up from child care advocates Monday, with the Canadian Child Care Federation praising the government's "incredible leadership" on a long-promised program.

"Importantly, this is not just about spaces, but a historic investment in building a system, which will include Canada's early childhood education workforce. It will take time but we are ready to start moving forward for all," the federation said in a statement.

Child Care Now, a national advocacy group, called the $30 billion plan "historic" and a "turning point" because it will create accessible and affordable care by capping the amount parents pay.

"Provincial and territorial governments will be hard pressed to turn away, especially given that each has stated repeatedly through the pandemic that child care is essential to their own economies," said Morna Ballantyne, the group's executive director.

"This is one area where we'll be proposing amendments and ever better policies," he said. "I'd prefer letting parents be in the driver's seat and giving options to all Canadian families.

"Canadians deserved better than an election-style budget when we're in a pandemic."

In 2006, former prime minister Stephen Harper tore up a previous funding agreement for a national child care system, opting instead to send cheques to parents with young children.

"This is déjà vu," O'Toole said, adding child care is a provincial responsibility and premiers should take the lead. "The Liberals have promised this three times before and did they consult before making it a fourth time?"

Cardus, a faith-based think tank, offered a similar criticism, saying this sort program will unfairly punish parents who care for their own children.

"Supporting parents directly is the equitable way to help all families, regardless of the type of care arrangement they use," said Andrea Mrozek, a senior fellow with the group. "The proposed plan devalues the work parents and other caregivers do outside of an institutional setting."

But at the party convention earlier this month, members signalled their top priority was some sort of national pharmacare plan to help Canadians pay for prescription drugs.

There are no new spending commitments for pharmacare in this budget. Instead, the government commits to "moving forward" on such a plan and working with the provinces, territories and other stakeholders "to build on the foundational elements that are already in progress, like the national strategy on high-cost drugs for rare diseases, toward the goal of a universal national program."

NDP Leader Jagmeet Singh said the Liberal budget "let the ultra-rich off the hook" by failing to levy a wealth tax that could have helped to fund new programs like pharmacare. He said he doesn't trust Prime Minister Justin Trudeau to keep his promises.

"Pharmacare was something he campaigned on — it was in the throne speech — and now his budget has completely abandoned it. What's to say he won't do the same with child care?" Singh said. "They're breaking their commitment and their confidence with Canadians, and they'll have to pay a price."

But Singh said there's "no way" his party would trigger a mid-pandemic election by voting against this budget in the Commons.

The pandemic has killed thousands of seniors in this country, including many in long term care homes. A recent report from the Canadian Institute for Health Information (CIHI) found 14,000 long term care residents have died of COVID-19 in this country to date, representing 69 per cent of all COVID-related deaths in Canada — significantly higher than the international average of 41 per cent.

Many have called for reforms to the way long term care functions in Canada to avoid future tragedies. Today, Freeland promised $3 billion in new spending over five years to help the provinces and territories implement new standards of care in these homes.

"We have tragically failed so many of those living in long term care facilities," she added. "To them, and to their families, let me say this — I am so sorry. We owe you so much better than this. As a country, we must fix what is so clearly and utterly broken."