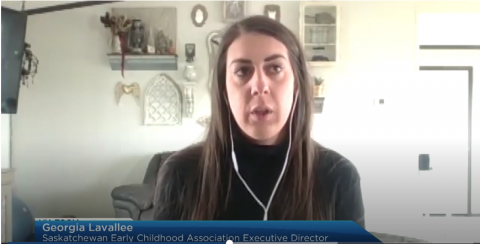 “This is something we’ve been advocating for so many years.”

Federal Finance Minister Chrystia Freeland committed to bringing childcare fees to an average of $10 a day in regulated centres by 2025-26, at a cost of $30 billion over the next five years.

Lavallee says it will allow more people to get back into the workforce and help to bolster the struggling economy.

“By decreasing these fees, not only will it support families, it will also support our economy as well, because we know that a vast majority of females will be able to re-enter the workforce,” Lavallee said.

According to a recent RBC report, almost half a million Canadian women who lost their jobs during the pandemic hadn’t returned to work as of January.

Mother of three Candace Seon says she, too, lost her job at the beginning of the pandemic and was faced with the decision whether or not to take a step back.

“There was times where we were on the decision making chopping block, was is it worth it for me to go back to work and should we continue to pay for daycare?” Seon said.

Right now the mother of three says she pays roughly $2,000 per month for daycare.

“My daycare costs are far higher than my mortgage,” Seon said.

“There’s no bill that compares to our daycare bill or daycare bills are our biggest decision maker in our family.“

According to the Canadian Centre for Policy Alternatives, the average cost for a toddler in Regina is $675 per month or $31 per day and $810 per month in Saskatoon, or $37 per day.

“Quite often, people are literally working to pay for early learning and child care,” Lavallee said.

“That being said, early learning and care is so important for the development of children and their future that parents often swallow that cost to ensure that their children have the best start to their life.“

Still, there are questions that need answers, including how the funds will flow to the provinces.

“We want to see the flexibility where it could be between actual spaces to where it could be early child hood learning which is very important for little learners,” said Donna Harpauer, Saskatchewan’s finance minister.

At the same time, Lavallee says she wants to see more support for early childhood educators.

“There’s so many early childhood educators that are living or that are compensated below the living wage, which has been laid out by the Canadian Center for Policy Alternatives, which is sixteen dollars an hour.”

“It’s one thing the pandemic has really brought to light is that early learning and child care is deemed essential.”