If you’re waiting to hear from the Department of Education or Public Health or the day care operator to find out, don’t hold your breath.

The Halifax Examiner is aware of two day cares in HRM that have closed because staff and/or children tested positive for COVID-19 — Kids & Company in Bedford and Willowbrae Academy in Dartmouth.

A parent of a child at the Dellridge Lane Kids & Company in Bedford is wondering why she wasn’t notified by either Public Health or the child care centre about the extent of the possible exposure. The Dellridge location has been closed for more than a week, and by the parent’s estimate, it may be connected to as many as 11 cases.

“I am coming to you with this information in hopes that you may ask Dr. Strang if the daycares have been directed not to go public with the number of positive cases,” the parent said in an email to the Examiner.

It’s a question the Examiner has forwarded to Public Health as well as to the Department of Education’s Early Childhood branch. Since case numbers began growing alarmingly 10 days ago, Public Health stopped naming schools and has never named a child care centre where positive cases have emerged. The government did not respond to this question or a request asking how many child care centres in the province have active cases.

The director for Kids & Company’s Nova Scotia franchise, Dorothy Morphy, declined to answer about a gag order or any other query. She forwarded our request for information to headquarters in Ontario.

Typically, Public Health issues public potential exposure advisories only when it believes that there may be people who were at a COVID-linked location who have not been identified. Otherwise, if all close contacts can be identified, they are contacted privately, and no public advisory is issued. However, nothing has prevented business owners from alerting the public on their own, and in fact many restaurants and other retail stores have used social media to tell the world that there was a potential exposure at their business, even though no Public Health advisory was issued. These are private business owners acting in what they say is a responsible and fully transparent manner, and the government has not objected.

But the concern here is that government-licensed day care operators are being directed by Public Health not to tell the public about the extent of COVID cases in their businesses. If true, it’s an extraordinary step by government, impinging on free speech rights and suggesting that Public Health is trying to limit public knowledge about COVID risks in day cares.

Given the aggressive spread of variant strains of the virus in the HRM community, and the fact most staff (and all pre-schoolers) are too young to be eligible for vaccination, there is no reason to stigmatize schools and day cares.

Still, the government could always make an exception to the age-based vaccination program, as it chose to do for police officers (that decision has since become moot as vaccination of police was superseded by the sped-up age-based approach to vaccination). These days, female early childhood educators are arguably at as much risk of contracting the virus as police officers.

But let’s go back and look at the information Public Health provided parents at the Dellridge Lane child care centre. On April 25, parents and staff received a notice of a confirmed positive case. Public Health said only staff and parents of kids who were “close contacts” (spent more than 15 minutes less than two meters away) would receive further notifications. See below. 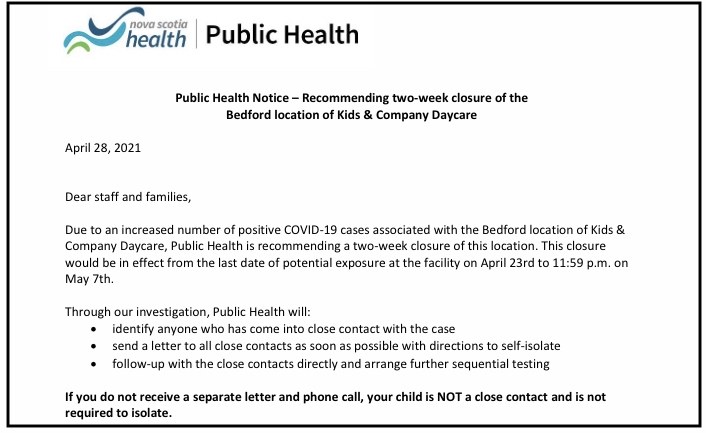 The letter from Public Health to parents with children who attend Kids & Company.

On April 28, parents got another email saying, “due to an increased number of positive COVID-19 cases at the Bedford location of Kids & Company, Public Health is recommending a 2-week closure of the location.”

The source, whose name we are protecting because the parent doesn’t want to lose the spot at the day care, says there were four classrooms closed within the day care because of positive COVID tests, and “because parents talk to one another, I believe there are approximately 11 cases of COVID in the day care. This number doesn’t include parents and siblings who have since become infected. No additional information was sent to parents by Public Health about any of the other cases unless the families were direct contacts of one of the individuals.”

Global News Morning TV anchor Paul Brothers is home sick with COVID and self-isolating with his wife and two children, all of whom have tested positive and have collectively had symptoms including headaches, cough, loss of taste and smell, and extreme fatigue.

In an interview with his colleagues, Brothers told Global News the source of their troubles can be traced back to an April 23 notification indicating a teacher had tested positive at the Bedford day care his two-year-old daughter attends.

“At that time, it was not mandatory to wear masks in day cares — which, looking back on it — you shake your fists. But at least it’s mandatory now,” Brothers told Global TV. He was told his daughter needed to be isolated, wear a mask, and start getting tested. “It’s really impossible to isolate a two-year-old,” he continued. “So that just started the domino effect and an 80-hour wait to find out that yes, indeed, she had COVID.”

Brothers did not name the daycare she attends, and we do not know if it is the same one which Public Health has closed temporarily. There are many child care centres in Bedford.

In Dartmouth, no one is answering the phone at the Willowbrae Academy in Burnside. The Examiner has calls in to the director of the centre as well as the customer service number of the franchise operation to confirm if its temporary closure is related to a COVID case, or cases.

Risk and the percentages

Meanwhile, the Canadian Union of Public Employees (CUPE), which represents hundreds of early childhood educators, has been pleading with the Education Department to cut class sizes to 50% to reduce the risk to both children and staff.

On Monday, Chief Medical Officer of Health Dr. Robert Strang said the Department of Education planned to cap enrolment at 60% of the day care’s total capacity. CUPE spokesperson Colleen Reynolds says that does not solve the problem of large classes within some centres. CUPE also asked the government to define who is considered an essential worker in order to assist day care operators when it comes to admitting new children.

Violet MacLeod, a spokesperson with the Department of Education and Early Childhood Development, says the province has responded to CUPE’s concerns with a memo sent yesterday to licensed child care centres. Here is a portion of that memo to day cares MacLeod also shared with the Examiner:

In response to a media question during Monday’s press conference, you may have heard Dr. Strang talk about working to keep child care capacity at 60% or less. This new approach is based on advice from Dr. Strang’s office and is being implemented based on the current epidemiology, and out of an abundance of caution.

Based on the attendance information you submitted on May 2, many of you are already operating at 60% capacity or less, and this will not impact you. In the meantime, we are directing you to remain at or below 60% of your licensed capacity beginning on Wednesday May 5th, and until further notice.

For those who are at 60% or above, our staff have started today May 4th, contacting centres to discuss current attendance and options to support your efforts to reduce capacity. This may include asking parents who do not require urgent care to keep their children home or our staff will match you with space at a nearby school or community facility, as examples.

We understand this is a challenging time, but as communicated yesterday, May 3, we will support your staffing and operational challenges, similar to last year. Financial implications for centres who have to make changes to meet the 60% threshold will be covered by government. We ask for your patience as we work through the logistics of this situation. Again, please understand that the situation can and will change rapidly and we appreciate everyone’s assistance as we move through this third wave, together.

Last spring, the government set aside $30 million to help child care centres make up for losses incurred during the first lockdown when centres were told to close. Today, with over a thousand active cases and hospitalizations creeping up, the government is relying on child care centres to provide what appears to be an essential service to keep the health care system running.

The situation underscores how high risk and under-valued child care continues to be, with no “pandemic pay” on the horizon for these workers. Also there’s precious little transparency about the extent of the risk when questions to Public Health about how many total cases attached to child care centres continue to be swatted away.

This is a developing story and we will update it should more information become available.