A spot for every child: for the first time, Quebec daycare will be a guarantee under new overhaul 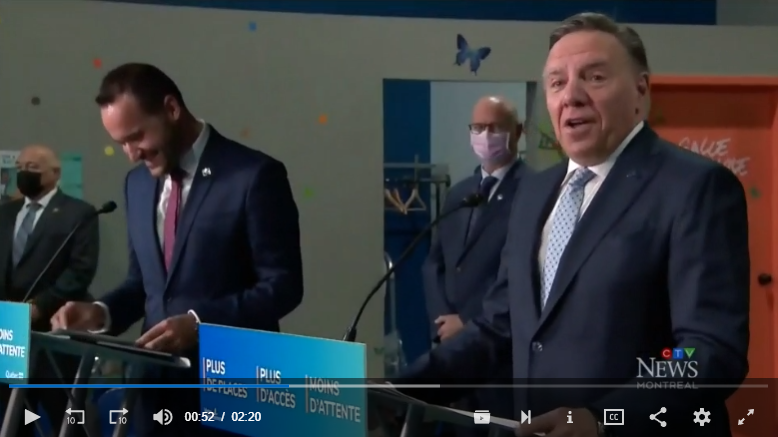 MONTREAL -- "A place for every child" is Quebec's new motto, Premier François Legault announced Thursday, saying a massive expansion of the daycare system is intended to eliminate growing waiting lists.

In the midst of ongoing strikes by daycare workers and a shortage of childcare spaces, the province will invest at least $3 billion in the system, committing, for the very first time, that every child will be accommodated.

The daycare system is a "source of pride" for Quebecers, said Families Minister Mathieu Lacombe, and while there's a "big catch-up" to do, the province plans to bolster it "more than ever."

In a press release, the province underlined why this is a turning point.

"Almost 25 years after its creation, it's the first time that a government commits that every child will have a space" in the daycare system, the release said, "and that all parents will be able to return to the workforce."

One of the main goals of the government’s “historic” action plan is to create 37,000 additional subsidized daycare spaces by 2024-2025, Legault said in a press conference.

To do so, the government plans to fund 17,000 subsidized spaces over the next few years, plus 1,000 spaces set aside for Indigenous communities, in addition to the 19,000 spaces that are currently under construction.

This plan includes the conversion of 3,500 non-subsidized spaces through a pilot project already underway.

“I have been in the same situation as many parents looking for childcare, and I know that it is not always easy," said Lacombe in a news release announcing the action plan.

"With this major project for families, I hope that these worries will be behind us."

Bill 1, the first one introduced under the new session of government, also solidifies the right to child-care for all kids from birth until they enter school.

Special attention will be given to children “living in precarious socio-economic contexts” under provisions of the new bill.

The proposed legislation would give the minister for families special powers to assign new daycare spaces based on demand.

Salary has been at the heart of ongoing tensions between unions and the government in recent years, especially in the last few weeks when workers held one- or two-day strikes to demand better pay.

The province says it needs much more staff to carry out the scaling-up it has in mind. There's currently an estimated need for about 17,800 educators in order to meet demand.

One of the six objectives of the new plan is to improve child-care workers’ salaries, as well as retaining and recruiting more educators by providing them with things like scholarships.

In order to increase staffing at the tremendous rate needed, the province plans to create a program where new trainees will do a week-on week-off system where they study every second week and work in daycares in practicum-type training in the intervening weeks.

The province expects that that plan, in combination with the planned salary increases, will attract enough workers, Legault said.