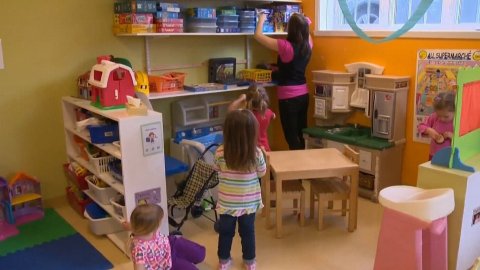 MONTREAL -- A new survey suggests more needs to be done to ensure English-speaking families have access to early-childhood services in their language.

The Community Health and Social Services Network (CHSSN) surveyed nearly 1,800 English-speaking parents across Quebec. As many as 62 per cent reported there were few early childhood services available in English where they live.

What’s more, 67 per cent had trouble getting pre and post-natal care in English, 69 per cent reported difficulty finding an English daycare, and 80 per cent struggled to access specialized services for their child.

More than half worried their child wouldn’t be understood in a French-language daycare, and 48 per cent worried that they, as parents, wouldn't understand important information from staff.

“That notwithstanding,” said the Quebec Liberal Party’s Language Critic David Birnbaum, “it's absolutely normal that, when it comes to getting care for our children, when it comes to being in hospital for an important diagnosis, we need to be addressed in our language.”

While the Legault government plans to create more daycare spaces with Bill 1, many are concerned the province’s French-language reforms will further strip away English-language services for those who need them.

“And like in so many areas of health and social services, the regime delivering services in English is put into great question by the actions of this current government -- not to mention by Bill 96,” said Birnbaum.

Johnson says most parents want the same thing: “to ensure that their children get the best opportunities possible.”

Quebec’s family and education ministries did not respond to CTV News’ request for comment.