As daycare workers continue their strike, unions and opposition present a united front 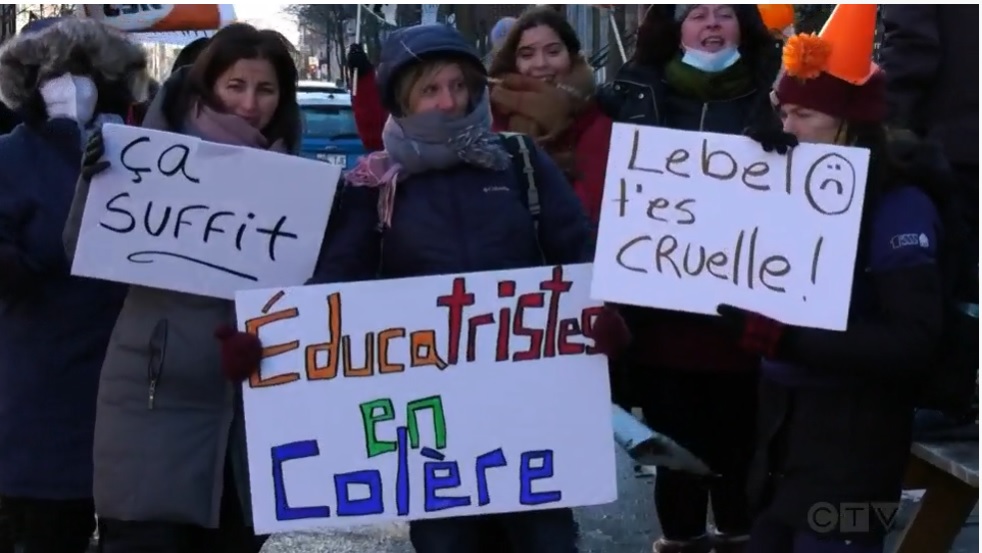 “It’s time to get over the crisis and find an agreement for everybody,” said Stephanie Vachon, a representative for the FSSS-CSN, a union representing CPE workers.

CSN-affiliated workers from approximately 400 daycares have been on strike since Wednesday, demanding better salaries for support staff, which includes administration, maintenance and kitchen workers, among others.

Close to 40,000 children and their families have been affected by the walkout — and if a deal isn’t reached before Thursday, leaders of two other unions representing CPE workers, the FTQ and the FIPEQ-CSQ, say their members could strike as well.

“We know that the government, when he’s going to have an agreement one of the unions he [copies] it for the other ones, so that’s why we are fighting all together,” explained Vachon.

The Quebec government recently published an advertisement claiming daycare educators were offered up to $30 an hour, but turned it down.

It also states that raises were offered to support workers, but does not specify the amount of money offered.

“Despite everything, unions are on an unlimited general strike,” reads the ad, translated from French.

“It’s Quebecers who pay for salary increases with their taxes,” the ad continues. “It’s parents and most importantly children who are suffering the consequences. For them, let’s settle this now.”

Sylvie Nelson, vice-president of the FTQ union, points out that the breakdown in negotiations is over pay for support workers, not educators, who received more attention in the ad.

She condemned the use of public funds for ads portraying daycare workers as unreasonable and claiming parents and children are suffering as a result.

“They’re not happy about this publicity,” she said.

On Friday the government offered a pay increase of 6 per cent to 12.5 per cent over three years, depending on the type of support job. But these numbers won’t cut it as far as unions are concerned; the FIPEQ-CSQ, for example, asked for an increase ranging between 13.6 per cent to 14.8 per cent on Thursday.

ALLIES AMONG THE OPPOSITION

In a rare moment of political unity, the National Assembly’s main opposition parties came together in supporting child care unions.

“If this fight is not done right now, it’s [a] future that will be even tougher for all those parents, for all those women, who cannot go back to work because they don’t have a spot in a CPE,” said Veronique Hivon, families critic for Parti Quebecois (PQ).

Manon Masse of Quebec Solidaire (QS) was in agreement, saying it’s a matter of equal opportunity for women.

“If [Legault doesn’t] do it, I have questions for him about when he says Quebec is a very equal society,” she said.

The government aims to create 37,000 new child care spaces by 2025, but critics like Masse stress that the current network is already short-staffed — and unfavourable working conditions might weaken the network even more.

The union says they’re prepared to strike until a deal is reached, however long that might take.

-- With files from The Canadian Press.