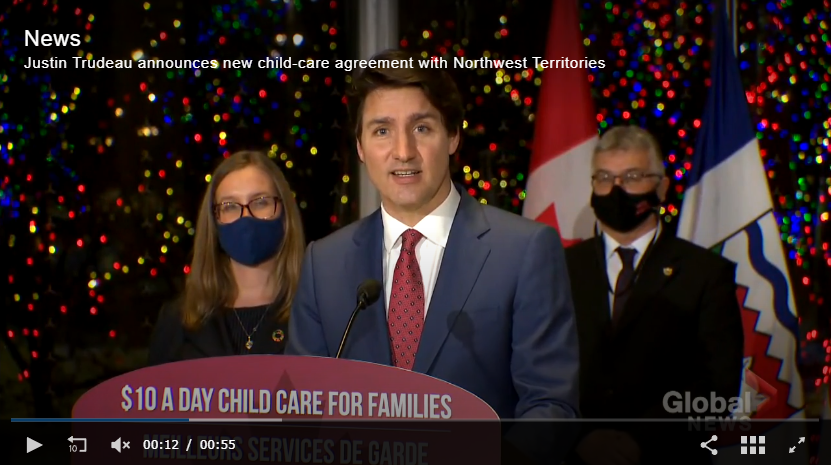 The Northwest Territories is the latest region in Canada to come to an agreement with the federal government for $10-a-day child care, Prime Minister Justine Trudeau announced Wednesday.

The $51 million agreement will cut child care fees in half beginning in March 2022, Trudeau said, and the fees will eventually decrease to $10 a day in five years’ time in the territory.

The measure will save $9,500 a year in Yellowknife, according to Trudeau.

Families in the territory are currently paying an average of $38 a day for child care, Families Minister Karina Gould said.

“Child care is good for parents, it’s good for kids, but it’s also good for the economy,” Trudeau said, mentioning that the economy will have better growth as “more women join the workforce.”

“We’re ready to work together … to deliver $10-a-day, high-quality child care for every family in Canada,” Trudeau said.

Nine provinces and two territories have reached agreements on child care with the federal government to date, and the government is eyeing an agreement with Nunavut in the new year as well, Trudeau said.

The Liberal budget in April promised to spend $30 billion over five years to create a national child care program, with $16.8 billion already allocated.

British Columbia was the first province to come to a deal in early July, worth $3.2 billion over five years.

Only Ontario and Nunavut have not reached a child care agreement yet, with talks continuing this week with Premier Doug Ford, who said he wants more money to keep the program beyond five years. 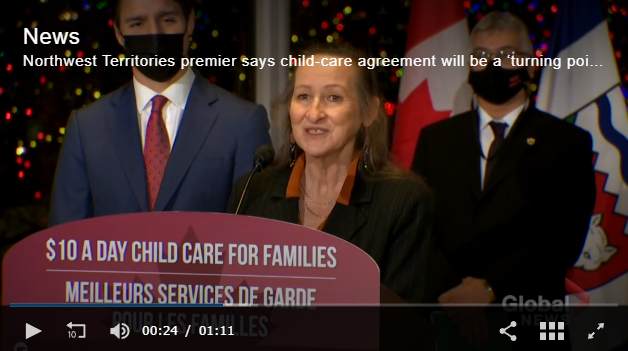 The NWT agreement will create 300 new spaces in the territory by 2026, according to Trudeau, to be provided only by not-for-profit child care centres and home day cares.

Trudeau said the deal takes into consideration the “unique challenges” of the region.

Premier Caroline Cochrane said the deal means some in NWT will have access to child care for the first time, as some smaller communities have to rely on families and friends to take care of children.

Cochrane said caregivers will have a “decent wage,” so the job isn’t something people do because they have “no choice.”

“This is going to be a profession for people,” she said.

The agreement includes a certification process for evaluators, a retention incentive to keep workers in the territory and a new wage grid for better salaries.

She said the COVID-19 pandemic brought child care to the forefront of issues to consider for the whole population, not just women.

“Early child development is critical to ensure children have success,” she said. “This agreement provides us the opportunity to get there.”

— with files from the Canadian Press