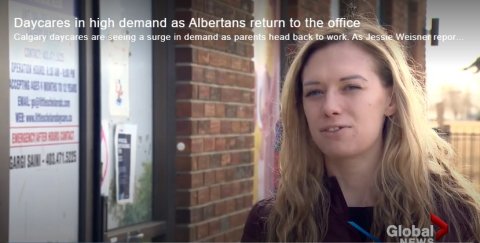 Calgary daycares are seeing an increase in demand as more parents head back to work.

On March 1, the Alberta work-from-home mandates were lifted, and many companies began transitioning employees back to the office.

The surge has been clear for Little Scholars Daycare in northeast Calgary, whose waitlist is growing daily.

“We have a huge waitlist… I receive like 15 to 20 calls every day for inquiries,” said Gargi Saini, owner of Little Scholars Daycare. “So it really hurts when we say ‘OK, we don’t have spot,’ and we have to disappoint so many families.”

“We are having a high volume of requests for the childcare,” said director Shamsa Kanwal. “Now they’re called back in person to their work, we are having high demand and we are doing our best.”

It hasn’t only been an adjustment for daycares. Many parents are separating from their young ones for the first time in two years.

“I was kind of part time, obviously, staying home with my son. But now (I’m) coming back full time, so trying to get through it going again,” said Tatiana Teevens, who brings her son to Little Scholars.

However, Teevens’ said her son was excited to get back to seeing friends again.

“It easier to send them back full time after being home with him. He’s happy about it,” she said.

“What I see is children are very, very happy to meet friends and have a routine. They are very comfortable socializing. I think it’s really really important,” She said.

Although many are relieved to see their children back at daycare, there have been challenges as well. Kanwal says Tiny Tots has been helping parents access childcare subsidies and has been working around unique schedules.

“Parents are going back to work and they need childcare. They’re asking for more flexibility in the timing, like part-timers and drop-ins,” said Kanwal.

Tiny Tots is currently hiring more staff to accommodate the surge in demand. Both daycares have also decided to expand their services to accommodate more families.

Tiny Tots is opening two new facilities in northwest and southwest Calgary, while Little Scholars is expanding their facility to take in 92 more kids.