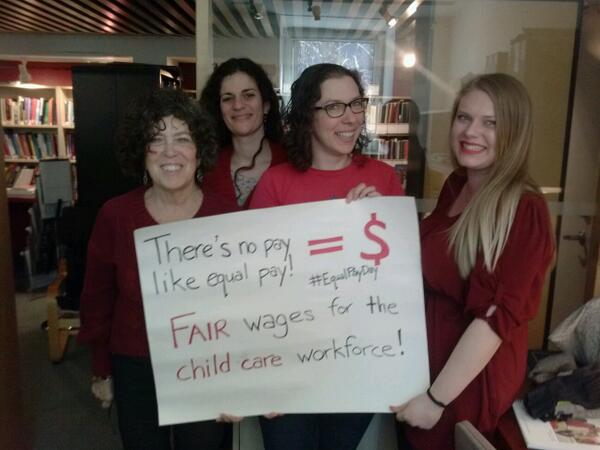 April 16th 2014 is the first official Equal Pay Day in Ontario recognized by the provincial government.

According to the Equal Pay Coalition:

Equal Pay Day illustrates how far into the next year a woman, on average, must work to earn the same amount a man made in the previous year. In 2013 the Equal Pay Coalition declared April 9th as Equal Pay Day. The latest stats show that the gender pay gap in Ontario has actually widened. That why for 2014 Equal Pay Day is: April 16th, 2014. Although pay equity is the law in Ontario, women, on average, earn 31% less than men. This pay gap affects women of all ages and education levels. Women are often paid less, even when their skill, effort, responsibility and working conditions are similar to men's.

Child care is central to the struggle for equal pay for women. Child care is key to mothers' employment. As Justice Rosalie Abella said in the 1984 Royal Commission on Equality in Employment, "child care is the ramp that provides equal access to the workforce for mothers". Pay equity is also important to the child care workforce - a group that's predominantly women. Yet, as CCPA's recent report on the pay gap points out, "for the first time in more than 20 years, there is no Ontario program with the goal of increasing the inequitable wages of child care staff".

CRRU has collected reports and news about Equal Pay Day in Ontario. For more about pay equity across Canada, please see the Equal Pay Coalition's page on other provinces.