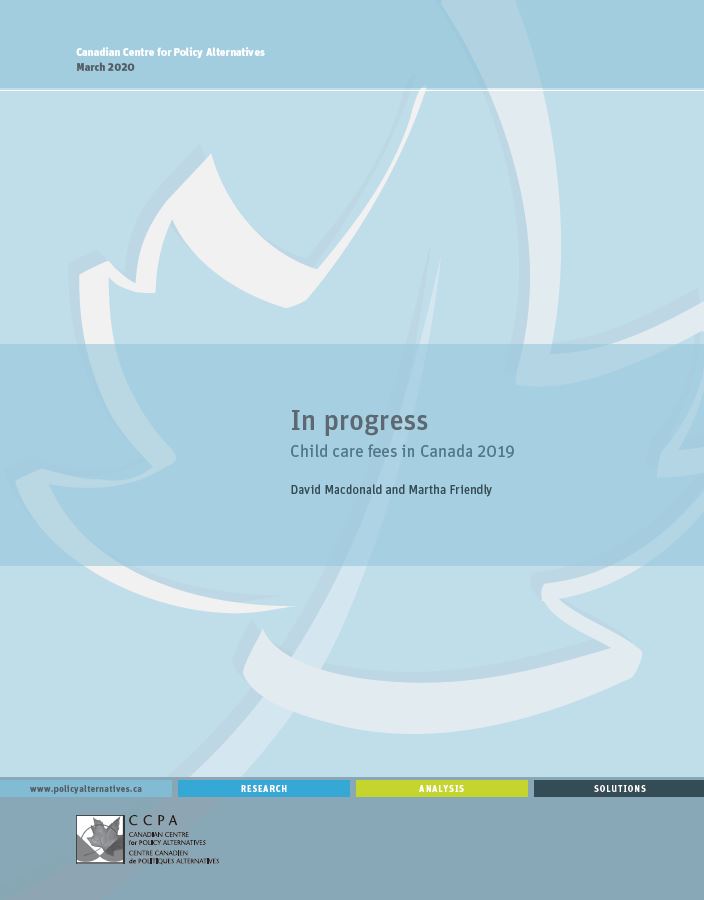 OTTAWA — Child care fees remain unaffordably high in most cities, according to a new study released today by the Canadian Centre for Policy Alternatives (CCPA) that updates the ranking of the most and least expensive cities for child care in Canada.

Policy initiatives clearly make a difference. Various levels of government have attempted different child care fee interventions, some of which have been more successful than others. Yet by and large, these initiatives do not achieve the goal of providing access to sustained, affordable and high quality child care for a substantial number of families.

“Families pay over $10,000 a year for an infant space in 78% of the cities we examined,” says David Macdonald, study co-author and CCPA senior economist. “Clearly there is still a lot of room for improvement when it comes to child care affordability in this country.”

The study, the sixth in an annual series on child care fees, provides a snapshot of the median child care fees parents pay in 37 cities across Canada for full-time licensed child care of infants, toddlers and preschool-age children. Fees were surveyed in October 2019. With the addition of nine new cities, for the first time this year’s survey provides child care fee data for locations in all provinces and territories.

"The implementation of various government interventions are showing up in our fee data. What this year’s report continues to make clear is that in the push to reduce sky-high fees, it is public policy—not market forces—that matters," concludes Macdonald.

Among the study’s main findings:

Infant child care continues to be most expensive in southern Ontario. Toronto tops the list at $1,774/month or $21,288/year, followed by Markham, Vaughan, Oakville, Mississauga, Kitchener and Richmond Hill.

Preschool-age spaces, the most numerous type, are most expensive in Iqaluit, Nunavut ($1,213/month), followed closely by Toronto and Oakville. Outside of Ontario, Calgary had the highest fees for preschoolers ($1,075/ month).

Since 2017, major policy actions have been undertaken in Newfoundland and Labrador, Ontario, British Columbia and Alberta, with varying results.

No matter the age category, fees remain lowest in all Quebec cities where fees for all age groups are set by the province at $179/ month.

In 2019, Newfoundland and Labrador joined Quebec, Manitoba and P.E.I. on the list of provinces that set fees. As a result, in St. John’s preschool-age fees dropped 24% since 2017, the biggest decrease of any city in that age category. Fees in Windsor and Hamilton Ontario also fell over 10%.

Fee reductions in B.C. have maintained fees at 2017 levels but haven’t reduced them substantially for children over three years old.

“Child care fees in Canada are lowest when services receive substantial public operational funding and where fees are set as a matter of public policy,” adds study co-author Martha Friendly, executive director of the Childcare Resource and Research Unit. “It’s also important to note that policy elements like fee regulation, public funding and whether the services are profit-seeking have a significant impact on what parents pay, and how affordable services are. We have data about what works. Now it's time for more action across Canada.”

The CCPA is an independent, non-profit charitable research institute founded in 1980.

Weighing the cost of childcare