The financial resources available to families with young children are an important factor affecting child development, and they can have long-term impacts on socioeconomic outcomes in adulthood. In many countries, governments have designed social programs to provide resources to families with young children. Some of these programs target specific insecurities, such as food, housing, child care or medical expenses, while other programs provide direct cash transfers to individuals and families with dependent children.

Because these programs are often taxable or means-tested, they may inadvertently discourage labour force participation among recipients. This would, in turn, reduce the effectiveness of the programs for boosting family income or targeting poverty.

A new study by Michael Baker (University of Toronto), Derek Messacar (Statistics Canada) and Mark Stabile (INSEAD) provides new insights into this issue. Specifically, it analyzes the effects of expanding child tax benefits on after-tax income among single mothers, in the context of the 2015 reform to the Universal Child Care Benefit (UCCB) and the 2016 introduction of the Canada Child Benefit (CCB). These reforms increased cash transfers, particularly among lower-income parents. The study focuses on single mothers because of the high rates of poverty typically observed for this group.

The study uses Statistics Canada’s Longitudinal Administrative Databank, which is a 20% nationally representative sample of T1 income tax records. It contains detailed information about demographics, employment, income, taxes and transfers for the individuals represented, and their spouses and families. To separate the effects of the reforms from other changes in economic and labour market conditions that occurred around the same time, the study compares single mothers and single women without children using a difference-in-differences research design. The analysis is restricted to women aged 25 to 54 since child benefits are typically available only for parents with younger children.

Chart 1 plots the after-tax income of single mothers and single women without children, from 2009 to 2018. 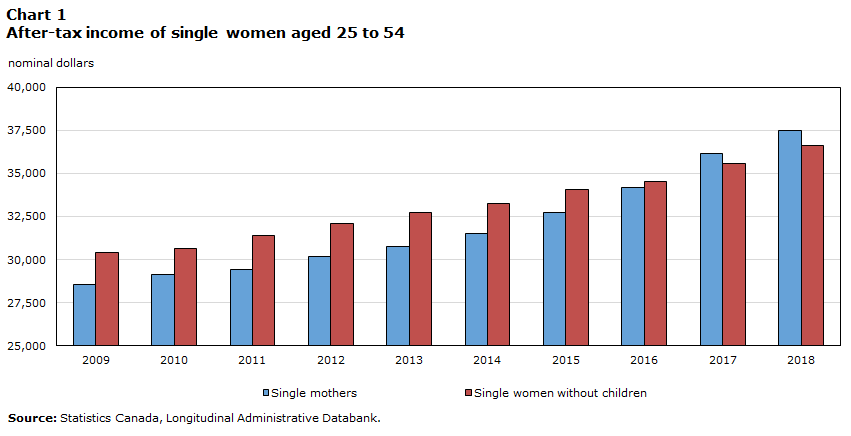 These results show that after-tax income for both groups has increased over time. For example, among single mothers, it rose from about $28,550 in 2009 to $31,500 in 2014. Over the same period, single women without children earned slightly more than those with children but saw their income increase along a parallel trend. From 2015 to 2018, the gap in average after-tax income between these two groups of women closed. This is attributed to the increase in child benefits for single mothers. While this effect occurred gradually, the two incomes were about equal by 2017, which was the first year of full CCB payments.

The preceding analysis does not directly consider the implications of the UCCB expansion and the introduction of the CCB for children in lower-income households. To examine this issue, the study estimates how low-income status has evolved since 2009 for single mothers and single women without children. Low-income status is defined in the tax data using the low-income measure (LIM). It is important to note that the LIM is not Statistics Canada’s official poverty indicator. However, this indicator was used in this study because it is readily constructed and available in the tax data, and because the tax dataset does not contain all of the information needed to create the market basket measure.

The results of this analysis are shown in Chart 2. There is a sizable gap between the two groups in the likelihood of having low income. From 2009 to 2014, almost 50% of single women with children had low income, whereas about 20% of those without children had low income. These likelihoods remain fairly constant over time, and this is interesting since the Great Recession of 2008/2009 does not appear to have had much effect. This is likely because the LIM is a relative measure of low-income status, and the recession affected earnings for both high- and low-income workers. 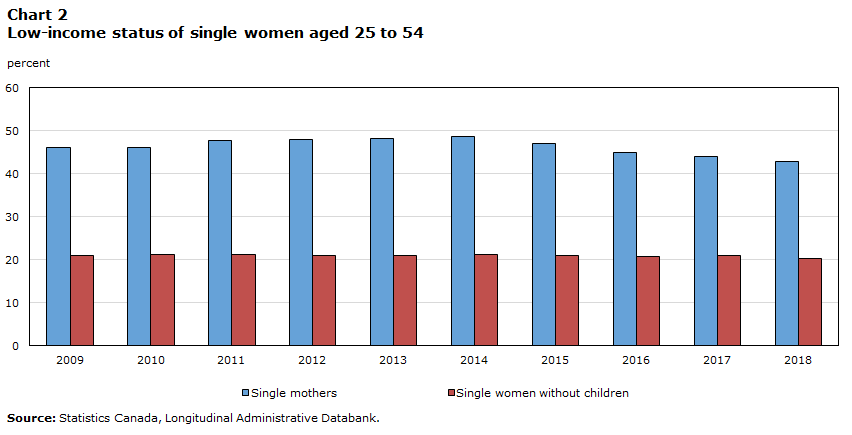 While low-income status remained stable up to 2014, Chart 2 also shows that it declined for single women with children relative to their counterparts without children from 2015 to 2018. This is attributed to the increase in income from the child benefit expansions, which raised after-tax income for some women over the LIM threshold. The likelihood of having low income declined by about 5.6 percentage points from 2014 to 2018, which represents an 11.5% decrease expressed relative to the 2014 low-income rate.

Taken together, the findings of this study suggest that the 2015 expansion of the UCCB and the 2016 introduction of the CCB increased income and reduced the likelihood of having low income for single mothers and their children. While not the focus of analysis, comparable effects were also observed among mothers who are married or in common-law relationships. For example, the likelihood of having low income decreased by about 3% out of a base of 10%. The long-term implications of these reforms on children’s well-being into adulthood remain to be seen.

The full report, titled The Effects of Child Tax Benefits on Poverty and Labor Supply: Evidence from the Canada Child Benefit and Universal Child Care Benefit, was released on March 15, 2021 (Baker, Messacar and Stabile 2021).