How much have childcare challenges slowed the US jobs market recovery?

The US economy lost a net of 8 million jobs between February 2020 and April 2021. Agreement is growing that people not actively seeking employment (inadequate labor supply) have been playing a major role in the slow recovery, as evidenced by factors including record job openings, the largest wage increases in decades, and other signs of a tighter labor market than would generally be expected given the still low levels of employment. Why has labor supply been slow to return? There are many candidate explanations, including the ongoing worry among some adults about getting COVID-19 if they return to the workplace, the increased availability and generosity of unemployment insurance benefits, and challenges for working parents associated with closed schools and inadequate childcare, among others. Diagnosing the sources of ongoing weak labor supply is important to inform the types of policies that are needed now to speed the recovery.

In this analysis, we quantify the effect of childcare challenges on the labor market by examining how much of the overall decline in employment can be explained by excess job loss among parents, and mothers specifically. We do this by constructing counterfactual employment rates, or employment-to-population ratios, as well as labor force participation ratesthat assign to parents with young children the percent change in employment and labor force participation rates experienced by comparable people without young children. The results of this exercise imply that differential job loss among parents, or even mothers specifically, accounts for a negligible share of aggregate job loss and could even have led to a small increase in jobs between the first quarters of 2020 and 2021.

School closings and ongoing childcare challenges have been a tremendous source of stress for parents during the pandemic. They are also likely to have lasting, negative impacts on the learning and social development of children. In this analysis, however, our focus is on the one specific, empirical question: How has parenting affected the aggregate employment numbers over the course of the pandemic? Instead, parents of young children have suffered about equally as others in the widespread and, in many cases, damaging employment losses that have occurred throughout the economy.

Women with young children have experienced the greatest rate of job loss over the past year, which is descriptively consistent with the hypothesis that school closures and childcare struggles have lowered women's work during the pandemic. Employment counts from the Current Population Survey in January, February, and March of 2020 and 2021 confirm that between the first quarter of 2020 and the first quarter of 2021, employment rates fell more for women with young children (defined as any own child under 13 in the household, including adopted children and stepchildren) than for all other women. Among all women, the employment rate fell by 5.7 percent (3.9 percentage points) for those with at least one child under 13, as compared with 5.0 percent (2.6 percentage points) for those without a child under 13.

The pattern is reversed among men, with larger declines among men without young children than among men with young children. The employment rate fell by 3.3 percent (3.0 percentage points) for men with at least one child under 13, as compared with a decline of 5.3 percent (3.2 percentage points) for men without a child under 13. Though explaining this finding is beyond the scope of this analysis, one possible explanation is the substitutability of labor supply between parents. 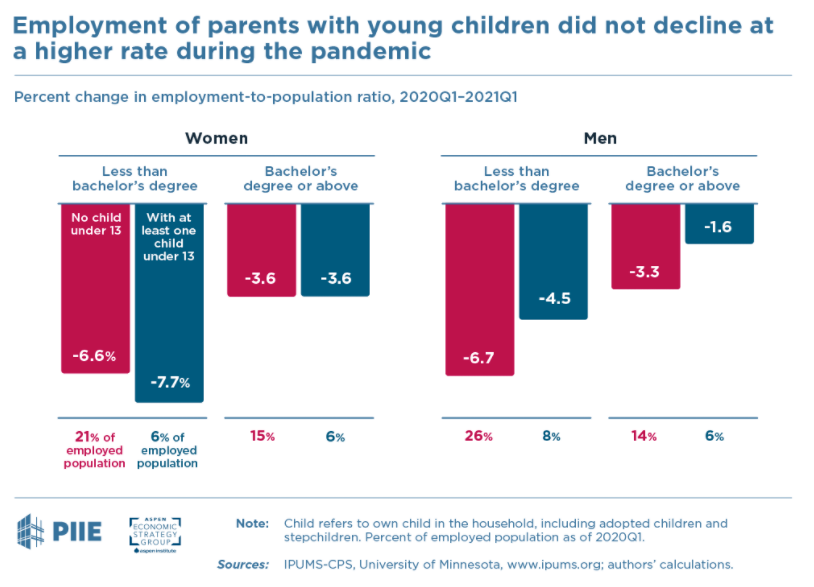 These comparisons are noteworthy, but they are not necessarily indicative of an effect of childcare struggles, school closures, or other factors associated with parenting on employment declines, even for mothers without a bachelor's degree. The reason is because women with and without young children differ on other dimensions that are related to employment outcomes, such as age, industry, marital status, income, and race and ethnicity. We next turn to a counterfactual analysis to estimate how much of the decline in employment—both overall and for mothers in particular—is attributable to having a young child in the household (and the associated challenges), adjusting for a range of factors.

Counterfactual analysis: What if the pandemic labor market experience of parents with young children was like that of otherwise similar people without young children?

The heart of our analysis is a counterfactual: What would have happened to aggregate employment rates if parents with young children experienced the same rate of employment decline as individuals without young children? This provides a reasonable estimate of the potential role of factors that affect families with young children, especially school closures and lack of childcare.

The motivation for this exercise is the observation that the fact that millions of mothers have lost jobs or left the labor force is not, by itself, evidence that childcare, school closings, or other child-related reasons are to blame. Hypothetically, if employment rates or labor force participation rates fell by the same proportion for similar people with and without young children, the primary causes of the decline are likely to be factors other than childcare challenges or school closures. In such a case, the source of the decline in employment among parents with young children would likely be something that was affecting everyone in a similar manner, such as workplaces being closed, jobs being undesirably unsafe, or unemployment insurance benefits being more generous and available.

Our baseline counterfactual accounts for some basic demographic differences between people with and without a child under 13. Specifically, we collapse the data into cells defined by sex, four age groups, and whether someone has a bachelor's degree. For each sex-age-education cell, we calculate what employment would have been if those with a child under 13 experienced the same percent change in employment as those in the same sex-age-education cell but who did not have a child under age 13. This allows us to compare parents of young children to otherwise similar individuals. We use the same methodology for labor force participation. 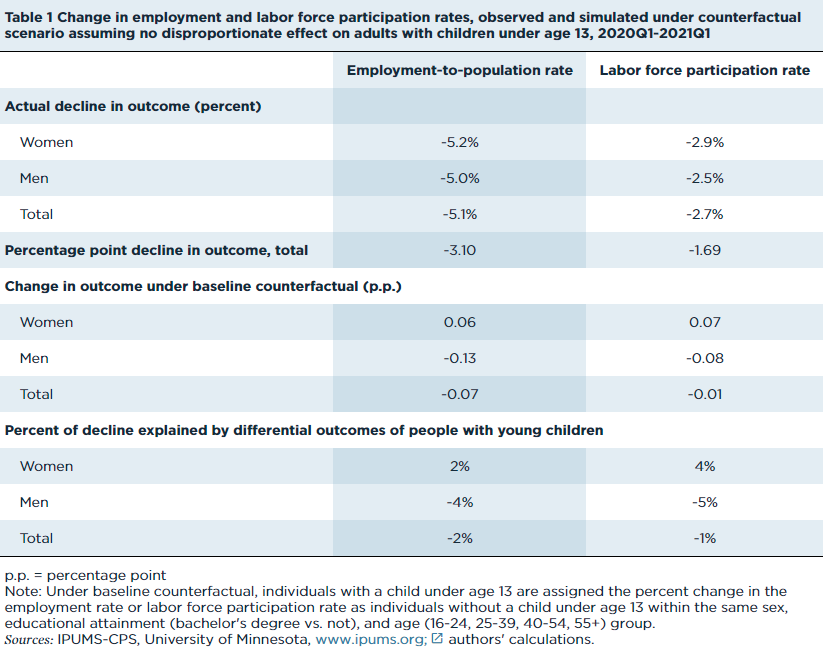 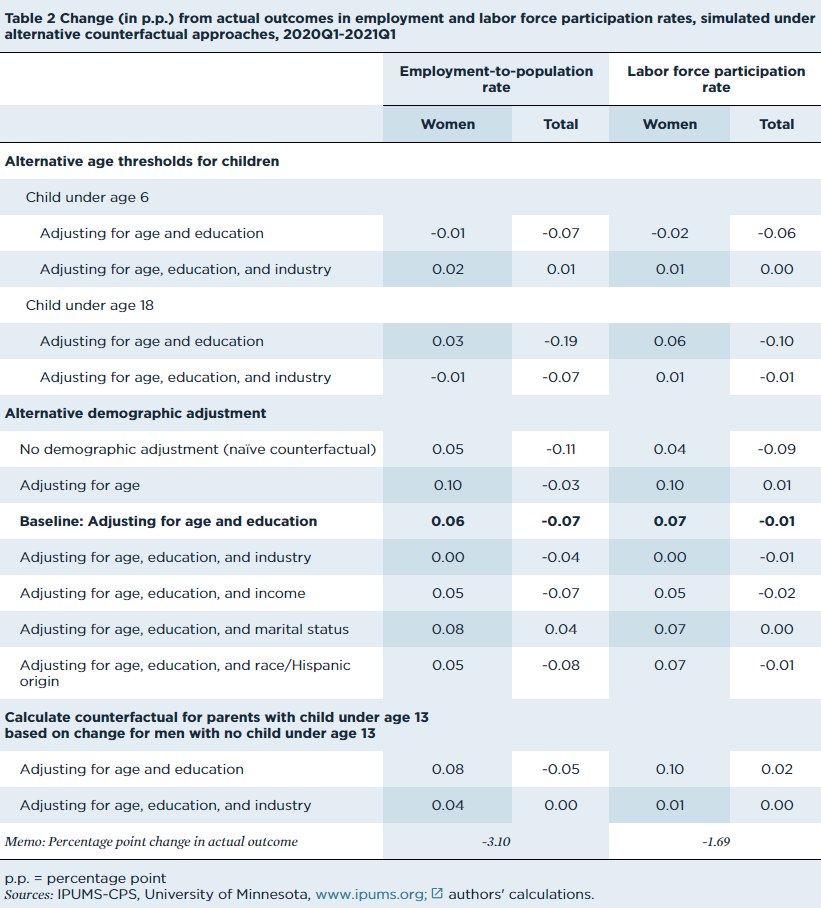 As a conceptual matter, defining cells based on age, education, and industry seems the most appropriate to us but we do not make it our baseline in order to be conservative. For example, to the extent that mothers with young children tend to work in a different set of industries than women without young children—even conditional on age and college-degree attainment—they would have experienced a differential degree of job loss. Constructing the counterfactual employment numbers adjusting for age, educational attainment, and industry implies a change in employment of 0.00 percentage point attributable to women, which can account for none of the total employment-to-population decline. The fact that the estimated share goes to zero when industry is included indicates that much of the variation between women with children and without (adjusted for age and education) is driven by the fact that women with children are disproportionately working in industries that faced greater declines.

For each different demographic adjustment we consider, the simulated change in the employment rate from assigning mothers with young children the corresponding change in employment of comparable women without young children is very small, below 0.10 percentage points across all counterfactuals, explaining at most 3 percent of the total decline in the overall employment rate.

We also tried to find direct evidence for the impacts of school closures. One method was to compare states that had above and below median rates of in-person schooling (according to this tracker) as of early May 2021. States with below median in-person schooling had larger percent reductions in employment rates for almost all groups by sex and educational attainment—whether or not they had young children—consistent with these states either having more serious problems with the virus or a greater level of mandatory or culturally induced social distancing. The differences between people with and without young children were not, however, systematically different in states with below median in-person schooling.

We also estimated regression models to obtain the conditional estimated impact of having a young child on employment rates for men and women in places with below median rates of in-person schooling as of early May 2021. The estimated regression coefficients do not show an excess negative effect on employment for men or women with young children in places with relatively low rates of in-person instruction. These results bolster our confidence in the results of our counterfactual analysis.

Finally, we also examined the patterns of employment losses specific to parents in the 2001 and 2007-09 recessions. We found that they were similar to the patterns observed over the past year. This suggests that there has not been something very different about how the pandemic and associated school and daycare closings have differentially affected the labor market outcomes of parents with young children relative to other workers who have also experienced the adverse impacts of the combination of the pandemic and associated recession.

While school closures and ongoing childcare challenges have substantially burdened parents and children alike, they do not appear to be a meaningful driver of the slow employment recovery. This means that the factors responsible for the slow employment recovery and depressed labor supply are issues that are not exclusively related to the struggles of working parents, such as the continued concern about the threat of getting COVID-19 at work or expanded unemployment insurance benefits and eligibility.

Furthermore, the fact that aggregate job losses do not appear to be explained by excess job losses among mothers with young children (after accounting for other factors like age, education, and industry) does not mean that mothers with young children have not been especially burdened over the past year. The fact that these women did not disproportionately retreat from the workforce in substantially larger numbers, while shouldering increased childcare and educational responsibilities for their children, might very well be an indication of excess burden that represents a shortcoming of the safety net established to respond to the COVID-19 crisis.

Melissa S. Kearney is the Neil Moskowitz Professor of Economics at the University of Maryland and director of the Aspen Economic Strategy Group.