The Government of Canada is focused on making life more affordable for Canadians. Since the spring budget, the federal government has signed Canada-wide early learning and child care agreements with 9 provinces and 1 territory — to help a majority of young Canadian families save thousands of dollars per year, starting next month.

In Budget 2021, the government laid out a plan to provide Canadian parents with, on average, $10-a-day regulated child care spaces for children under six years old, within the next five years, including a 50 per cent reduction in average fees by the end of 2022.

This is an economic issue as much as it is a social issue. The government’s plan to build a Canada-wide, community-based early learning and child care system will create new jobs and growth, and get parents — especially mothers — into the workforce. Affordable child care is estimated to raise real GDP by as much as 1.2 per cent over the next two decades.

As of the Economic and Fiscal Update 2021, the government has entered into agreements with 9 provinces and 1 territory.

As part of these agreements, the Canada-wide early learning and child care transfer payments from the federal government to the provinces and territories will increase from $3.0 billion in 2021-22 to $7.7 billion in 2025-26. 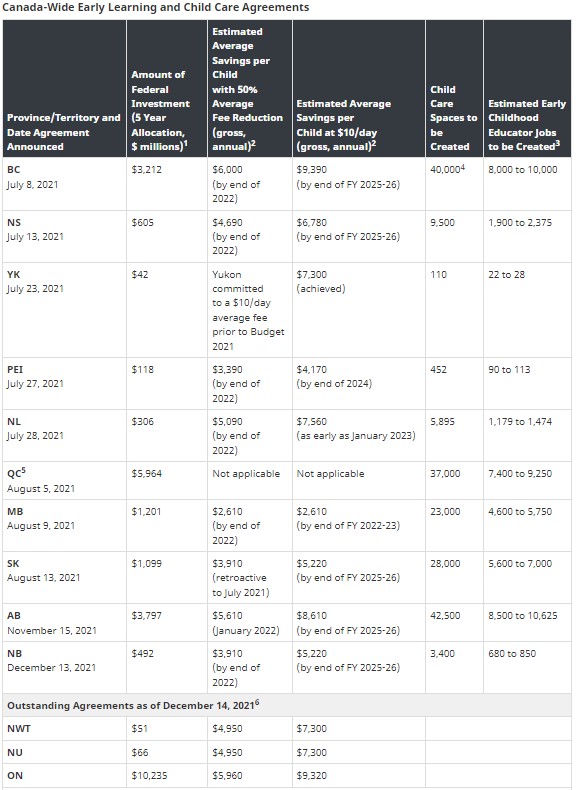 1 National Canada-wide early learning and childhood allocations are calculated based on projected 0-12 child population and include base funding of $2 million per province/territory per year.
2 Employment and Social Development Canada estimates. Savings estimates are relative to 2019 levels, are based on out-of-pocket parent fees and do not include amounts that would be recovered through provincial/territorial tax credits or the federal child care expense deduction at tax time, or changes to provincial/territorial or federal benefits as a result of lower child care expenses. Actual savings for families will vary based on factors such as actual fees paid prior to reductions.
3  Employment and Social Development Canada estimates. Range of estimated early childhood educator jobs created is based on the average number of early childhood educators expected to be required per new child care space.
4 B.C. committed to creating 30,000 new spaces within five years, and 40,000 new spaces within seven years.
5 The Government of Canada has entered into an asymmetrical agreement with the province of Quebec that will allow for further improvements to its early learning and child care system, where parents with a subsidized, reduced contribution space already pay a single fee of less than $10 per day.
6 Employment and Social Development Canada estimates of federal investments and potential savings, should agreements be signed on equivalent terms to agreements signed to date. Child care spaces to be created (and in turn, early childhood educator jobs to be created) are subject to negotiations.