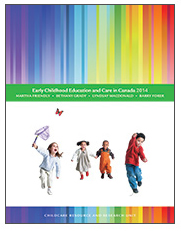 The Childcare Resource and Research Unit's (CRRU) new report Early childhood education and care in Canada 2014 is its 10th compilation of Canada-wide data on child care and related early childhood programs. It considers child care space provision, budget allocations, and service delivery information in the 2012-2014 period, comparing these to previous years. It also provides detailed provincial/territorial descriptive information on kindergarten and child care programs (such as educator training, ratios, group/class size, governance and financing) as well as duration and payment for maternity/parental leave.

The report is based on current data provided by provincial/territorial ECEC officials, Statistics Canada and other current data and research as well as CRRU’s ECEC in Canada series. CRRU's ECEC in Canada reports have been published about every two years since 1992. They allow both cross-Canada and longitudinal tracking of ECEC programs and policy, as a consistent approach has been used to ensure data comparability.

Among other information, the data in ECEC 2014 show that:

A preliminary version of this report titled Preliminary data: Early childhood education and care in Canada 2014 was published in October 2015. This full report includes the information in the preliminary report, so supersedes it. There are a few small differences between the data in several of the tables in this report and the Preliminary data report due to recalculations or new information.

Note: This is the revised copy of Early childhood education and care in Canada 2014 as of March 10th 2016.