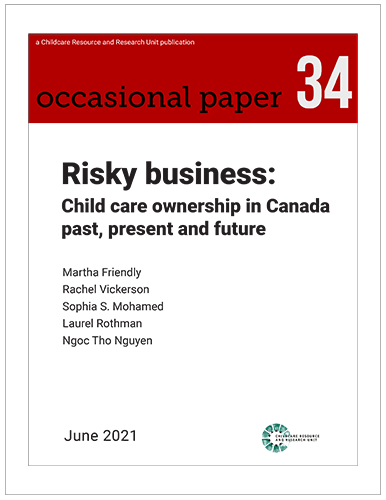 This report is available online for download.  See links below.

The issue of ownership, or auspice, of child care centres, has long been one of Canada's most hotly contested child care policy issues, shaping provincial and national debates on child care since the 1970s. This new comprehensive CRRU Occasional Paper is intended to inform public and policy debate about this important ELCC issue. As Canada develops a more ambitious, much more publicly funded cross-Canada child care system, it will need to substantially expand the supply of services to make participation more accessible and equitable. Thus, it will be important to carefully consider the available evidence and experience of for-profit care in order to make the best policy decisions.

The paper first examines the idea of a child care market model and the role for-profit ownership plays in child care markets. It then discusses the financialization of child care, as international private equity corporations specializing in profitable acquisitions now play enhanced roles in the child care equation. It provides a brief history of the issue of child care auspice in Canada, then reviews the evidence base using selected research and analysis from Canada and international literature. It then compares the issue of ownership in long-term care to the child care sector, noting similarities and differences. An appendix including a profile of each province/territory from the perspective of child care ownership is provided, allowing examination of the effects public policy has played in how child care ownership has developed across Canada. A second appendix identifies the full range of literature reviewed for the paper.

The paper concludes that –  based on all we know about building the foundations for a publicly funded, quality, universal child care system – advancing for-profit child care is a risk, not an asset.

It argues that the most constructive solution going forward would be to adopt a three-part plan: first, maintaining and funding the existing supply of regulated, public, non-profit and for-profit child care; second, ensuring more vigorous, publicly managed regulation including affordable provincial/territorial parent fees and wage scales to ensure decent staff compensation; and third, limiting future expansion of the supply of child care services to public and non-profit providers while simultaneously pursuing new, proactive, planned public strategies for developing early learning and child care services when, where and for whom they are needed.