Creating universal child care from the ground up: The legacy of Toronto's grassroots child care advocacy

Lisa Pasolli is a historian of 20th century Canada with specialties in the history of social policy, women and gender, and the politics of child care. She is an Assistant Professor in the Department of History at Queen's University. To read more about Lisa vist her website. 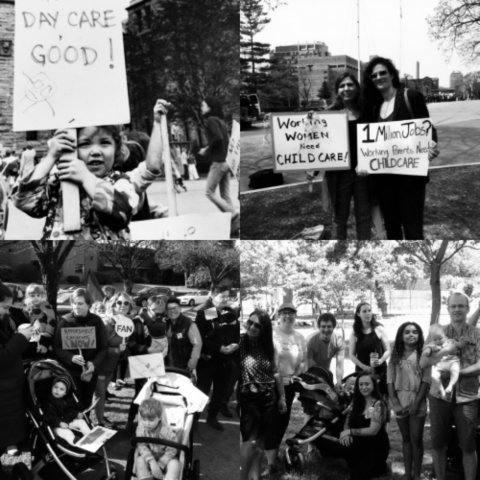 Over the past year or so, we’ve been hearing a lot about the Royal Commission on the Status of Women. It’s been half a century since the commission’s report was released in 1970, and to mark its 50th anniversary feminists took special note of the recommendations that remain unaddressed. Chief among those, of course, was the call to create a national child care system. When Finance Minister Chrystia Freeland delivered her historic Budget 2021 speech earlier this year, promising $30 billion to build a universal ELCC system, she invoked the Royal Commission as a symbol of the long struggle for child care.

As important as the Royal Commission was, though, it’s not the only child care story of the late 1960s and early 1970s. While the commissioners (the women in hats and gloves, as feminist Kay Macpherson would have called them) were compiling their policy recommendations, there countless other women, men, parents, and community members (the folks in t-shirts and jeans) engaged in the grassroots work of child care advocacy. Julie Mathien’s new occasional paper, Struggles and sit-ins: The early years of Campus Community Co-operative Day Care Centre and child care in Canada, tells one of these compelling grassroots stories. This is a story of a group of people at the University of Toronto, motivated a belief that more and better child care could transform the world, who committed themselves to the on-the-ground action required to turn ideology into practice.

It’s hard not to feel a little thrill of excitement as Mathien recounts the centre’s founding: finding an unlocked window at the back of a university-owned house at 12 Sussex Avenue, a group of people entered the house, moved in supplies, and opened its doors as the U of T’s first child care centre on September 22, 1969. Over the next several years, parents, volunteers, and supporters fought to secure funding, licensing, and to expand their services to meet the ever-growing child care needs of the university and surrounding communities. Their methods were controversial, public, and effective. Demonstrators staged a sit-in in Simcoe Hall in March 1970, demanding rent-free space and funding for renovations. In April 1972, the group occupied another building at Devonshire Place and remained there for several months until capital grants were secured to renovate and permanently establish a new child care centre.

Historians love to write about sit-ins, rallies, occupations, rousing speeches, and marches, seeing these (rightfully so) as landmark moments in the history of grassroots child care advocacy. There’s no shortage of these important moments in Mathien’s paper, which positions the U of T actions in a longer context of Ontario child care struggles, including, for example, the 1974 campaigns against the Birch proposals. We come to understand the co-op, too, as part of a much bigger story of the feminist and New Left movements of the late 1960s, one devoted to challenging the constraints of the nuclear family and undoing sexist child-rearing.

It’s crucial to remember that the fight for better child care has always been about making a world in which children, women, and families are free to achieve their full potential. The ideologies and philosophies of child care advocacy continue to provide the framework of our actions, as they have always done. But what Mathien captures so well is the daily and often tedious work that has made up much of the child care advocacy movement over the past several decades. When it came right down to it, the success of the Campus Community Co-op was due to the sheer persistence of the people willing to confront an inflexible government bureaucracy. Provincial licensing was required to get access to fee subsidies, but chronic lack of funding left them unable to make the upgrades required for licensing. Licensing also required qualified staff, but no ECE program in Canada specialized in programs for infants and toddlers. Dealing with these bureaucratic hurdles meant preparing for hearings, analyzing and re-writing legislation, applying for grants … the list goes on. The fight for child care was waged through marches and petitions, certainly, but in the meantime it was also waged through wearisome bureaucratic battles that, piece by piece and on a daily basis, helped ensure access to high-quality and affordable services.

As Mathien points out, the efforts of groups like the U of T campus co-op have helped ensure that Ontario’s child care sector leans heavily towards non-profit services today. Their legacy matters. As we moved, in 2021, towards a universal early learning and child care system, let’s give rousing speeches and gather for marches and gather signatures for petitions – just as advocates have been doing for 50 years. But it’s just as important to take inspiration from the women and men – including Mathien herself – who worked every day, challenging “institutional reticence” and tackling systems designed not to work for them, to nevertheless create services that met the needs of children, parents, families, and communities.