Why universal childcare is essential for a more equal Canada 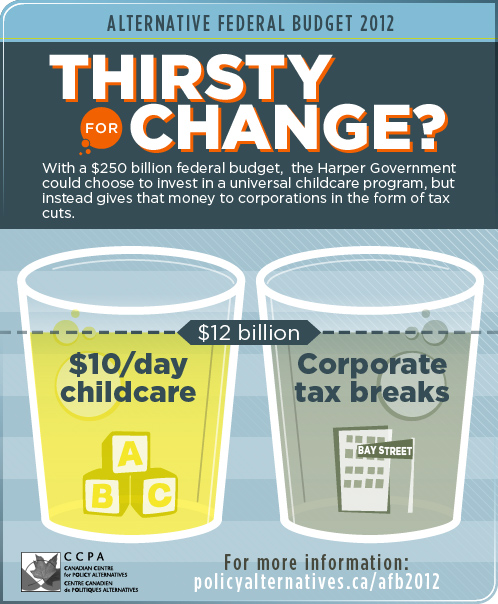 If anything positive has emerged from Canada's growing inequality, it is that a conversation about "the Canada we want" has begun, as pundits and ordinary Canadians have begun to make the connections between health and wealth, public services and social justice, economics and democracy, taxes, inequality and social programs. Over the past year, public forums, blogs, conferences, and the media have explored these issues that came to full public attention when the Occupy Movement shone a spotlight on inequality. As this debate has gained strength, the idea that a national childcare program is a key piece of a more equal Canada has become part of the discourse.

While economic inequality-the gap between the rich and poor (or the 1% and the rest) - is central to the broad discussion, it has become obvious that inequality is complex and varied. Gender inequality, generational inequality and racial and ethnic inequality are variations on economic inequality. These are driven by some of the same political structures and circumstances that have inhibited development of the childcare system needed by many Canadians. At the same time, it is obvious to many that a solid policy framework and sustained public funding to ensure a system of high quality early childhood education and care are integral to reducing inequality and creating a fairer, more inclusive Canada for all.

Generational inequality means that young families are squeezed on all sides. To be sure, a childcare system won't solve issues such as stagnant wages, hard-to-find good jobs, high educational debt and increasing costs of living such as housing. But today's young mothers and fathers need to work harder and longer than did their parents, while erosion of Canada's never robust social safety net has left them struggling to survive. Young families, including newcomers to Canada and Aboriginal families (who experience Canada's most extreme inequality) need good family policy but especially childcare. Childcare enables young parents to get the education/training they need to access good jobs and should allow mothers and fathers to work without enduring years-long childcare wait lists or breaking the family budget. Childcare makes it more possible for low income or sole support parents (who are mostly women) to take advantage of opportunities for advancement. At the same time, all parents can better balance work and family if they can be confident that their children are safe, thriving and happy.

For women, economic inequality is still a reality three decades after the 1970 report  of the Royal Commission on the Status of Women. Despite record numbers of women in higher education and high labour force participation, women's equality is undermined as women continue to make up for the lack of public services to care for their young children, and-increasingly-aging parents as well. Mothers cannot afford to stay home but without access to good childcare, may be forced into lower wage jobs or part time work with little prospects for benefits or a pension. Childcare has been, and still, is a key women's issue, and is fundamental to any agenda for women's equality.

Economic inequality affects children too. While human capital arguments about investing in the next generation and creating a better future workforce are marshaled to provide the rationale for programs such as full-day kindergarten, children need good "care" as much as "education". The idea that these are inseparable and that children thrive best intellectually, academically, socially and physically when they live in well-supported families and communities is not new. But in practice this means supporting parents to work or study, ensuring that struggling families have adequate resources to raise children and providing community spaces where families can actively participate-as well as making sure that children are nurtured across a spectrum of domains. All of these are facilitated by well designed, well integrated high quality early childhood education and childcare programs. As the research clearly shows, children benefit most when families are well supported, communities are inclusive and invite democratic participation, and early childhood services are high quality.

Finally, childcare fits into an agenda for a more equal Canada because it is directly linked with human rights. Access to high quality childcare is a children's right, a women's right, and a human right, as defined by various United Nations agreements and thus part of Canada's (and the provinces') human rights obligations. Childcare as a right means ensuring that children and young families get a fair share of our collective resources. It means shifting the conversation about childcare from human capital to human rights, and it means recognizing that inequality for families and children undermines Canada as a protector of human rights and a good place to live.

Economic, generational and gender equality means creating societal structures to sustain families and children by ensuring that the necessary resources to support them are generated through a fair tax system. It also means creating the universal, high quality, publicly managed early childhood education and childcare system that-if well designed as a system, not a market-can be the backbone of support for families. As the now-defunct National Council of Welfare stated back in 1999 "Many social programs support families but childcare is the backbone of them all".