Will Ottawa’s childcare plan actually help parents during the recovery? 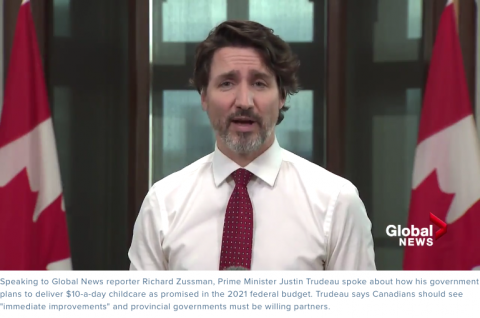 With their three-year-old daughter Ramona in full-time daycare in Calgary and her little sister, eight-month-old Ruby, poised to join her next year, Hilary King and Adam McRae call the Trudeau government’s vision of a national $10-a-day childcare “life-changing.”

But King and McRae aren’t confident the plan will change their lives.

Finance Minister Chrystia Freeland’s budget pledges the federal government will pony up $30 billion over the next five years to create a Canada-wide early learning system and a permanent funding increase of $8.3 billion per year thereafter. The goal is to cut childcare fees in registered centres in half by the end of 2022 and eventually reduce the cost of childcare to $10 per day by 2026, the budget said.

But Alberta — along with Manitoba and Ontario — has already voiced skepticism about the federal government’s offer, which comes with an emphasis on supporting not-for-profit childcare.

King and McRae worry their province won’t sign on to Ottawa’s plan.

“I don’t think we will specifically benefit from it,” says King.

With both children needing full-time childcare next year, King and McRae say they’ll be paying around $3,000 a month in fees. With two full-time jobs and some savings set aside, they call themselves “extremely lucky” to be able to shoulder the cost. But, King adds, not everyone can afford it.

“I have friends who have decided to stay home because of that — because their wage … won’t cover the childcare that they would have to pay,” she says.

Can parents expect lower childcare fees in the coming months?

The dilemma many young parents — and disproportionately mothers — often face between going back to work or staying at home to save on childcare costs has taken on a new significance in the COVID-19 health emergency. For some families, the pandemic all but wiped out savings that were meant to cover the expensive daycare years, childcare advocates say. And although childcare enrollments have dropped precipitously since the onset of the pandemic, there’s also the question of whether waitlists for childcare spots will become even longer after the crisis is over, as financial hardship forced some childcare centres to permanently close, they add.

Several economists have been warning for close to a year that a lack of childcare options as the economy reopens could force scores of women to forego employment opportunities and become a chokepoint for the recovery.

But can Ottawa’s national childcare plan become a reality fast enough to help those women re-enter the workforce as the economy goes back to normal?

“I don’t believe this measure will have a substantial effect on the next few months,” says economist Armine Yalnizyan, a fellow on the Future of Workers at the Atkinson Foundation who is part of a group of experts advising the Minister of Finance on policies to support women’s employment.

Still, it’s “quite possible” that some of the provinces and territories will act very quickly to implement measures that will improve access to childcare as well as affordability in the near future, Yalnizyan adds.

In its provincial budget, for example, the B.C. government pledged this week to double the number of spacesf available under its own $10-a-day childcare pilot program. And Yukon rolled out a childcare subsidy program at the start of April.

But the reception has been considerably cooler in the Prairies and Ontario.

“We have trouble with a federal government here that doesn’t want to partner effectively on providing health care,” said Manitoba Premier Brian Pallister. “So I’m very hesitant to give a blank cheque to the federal government already on a pronouncement pre-election.”

While Ottawa is offering tens of billions of dollars in added investments for child care, it ignored premiers’ request for a $28-billion-a-year boost in healthcare transfers.

The question of healthcare funding may give provincial governments cold feet about signing on to a national childcare program, says Bill Robson, CEO of the C.D. Howe Institute. The provinces have been at the forefront of the battle against COVID-19 but were already facing fiscal challenges and ballooning health care costs before the pandemic, he notes.

And Ottawa’s history of shrinking away from sharing the cost of healthcare may make premiers’ leery of taking Freeland up on her national childcare offer, Robson says.

“We have seen this movie before. It happened in the 1970s and the 1980s when the feds got the provinces into new programs in health care, particularly, and welfare. And then in the long run, the federal money cut back and the provinces got left holding the bag,” he says.

But Yalnizyan says the childcare arrangement Ottawa is seeking with the provinces and territories is fundamentally different. While the federal budget mentions federal and provincial governments eventually sharing child care costs on a 50-50 basis, that doesn’t imply provincial and territorial governments having to cough up more cash, she adds.

The provinces already shoulder the lion’s share of public funding for childcare, with the federal government account for just 12 per cent of it on average, according to Yalnizyan. Getting to a 50-50 cost split simply means Ottawa would have to significantly ramp up its share of the financial support, she adds.

A childcare Plan B

How quickly families across Canada will see a difference in childcare costs will likely depend on where they live and how willing to negotiate their provincial and territorial governments are, Yalnizyan says.

And that’s why Ottawa should have a Plan B for childcare in its back pocket to help parents during the recovery if the negotiations take too long, she adds.

“We can’t be starting another school year and telling mothers again (they’re in for) another year of this … because we just weren’t ready because we were hoping to negotiate with the provinces,” she says.

Working mothers contribute 40 per cent of household incomes on average, according to Yalnizyan.

Over the past year, 12 times as many mothers as fathers have left their jobs to care for young children in the pandemic, with lower-earning moms disproportionately affected by job losses, according to a recent RBC analysis.

If many of those female parents can’t go back to work due to lack of childcare options, “you’ve got … a drag on (the) rebound,” Yalnizyan says. “You’ve got a drag on growth.”