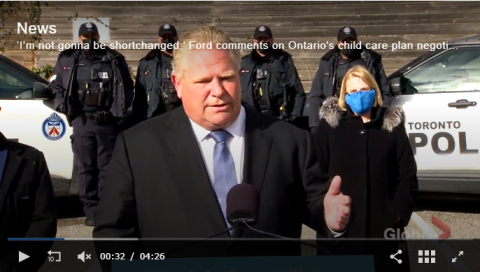 MISSISSAUGA, Ont. — Ontario’s education minister says the province is sitting down with the federal government on Wednesday for child-care negotiations.

Nine provinces and territories have already signed deals with Ottawa on the $30-billion, five-year child-care plan to cut fees to an average of $10 per day and cut them in half by next year.

Stephen Lecce says Ontario officials will meet with the federal government Wednesday to try to hammer out a fair deal as soon as possible.

Lecce has said the money currently on offer from the federal government for Ontario would not reduce fees to $10 a day.

Karina Gould, the federal minister of families, children and social development, has said Ontario has not submitted a detailed action plan on how it would spend federal funds.

A spokesperson for Gould says more advanced conversations can happen once Ontario submits that plan, but the federal government is looking forward to the discussions.

Lecce was speaking Tuesday in Mississauga, Ont., to announce an annual funding allocation for capital school and child-care projects of $600 million, which he says will create about 3,000 new child-care spaces and 26 new schools.