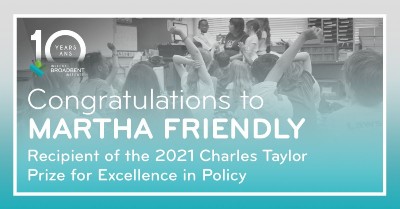 The Taylor Prize is awarded annually to a researcher whose work has made an important contribution to policy debates relevant to building a more socially-just Canada.

This year, the CRRU Team is excited and proud to join in the congratulations of Martha Friendly, our founder and Executive Director, as recipient of The Charles Taylor Prize for Excellence in Policy Research from Broadbent Institute | Institut Broadbent.

We are continually inspired by your dedication and commitment to early learning and child care and to the Canadian child care movement!

The Charles Taylor Prize for Excellence In Policy Research is awarded annually to a researcher whose work has made an important contribution to policy debates relevant to building a more socially-just Canada. The winner of this year’s Taylor Prize is Martha Friendly.

Martha Friendly is the founder and executive director of the Childcare Resource and Research Unit. As a policy researcher, Martha is an active participant in the cross-Canada child care movement that has been advocating for a universal public system of high-quality child care since the 1970s. Martha has authored many popular, academic and policy documents on early learning and child care including two books, book chapters, journal articles, reports and opinion pieces.

Besides working for almost 50 years on research and analysis on child care, Martha has been an appreciative and involved user of child care.

Her formative first child care experience was as a parent at the York University Co-operative Day Care Centre in the early 1970s. Both of her children, and then her grandchildren, had the benefit of quality public and nonprofit child care from their infant rooms through school-age.