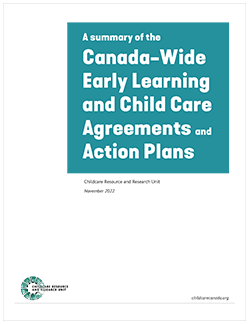 Download this publication: A summary of the Canada-Wide Early Learning and Child Care Agreements and Action Plans (PDF 1018KB)

Purpose and method of this paper

This document is intended to be a reference for the federal/ provincial /territorial Agreements and first round of Action Plans that represent Canada’s first phase of the Canada-Wide Early Learning and Child Care initiative (CWELCC) introduced in 2021. It summarizes selected content of the 2021–2022 Agreements, Action Plans and (if relevant) Amendments to the Agreements. It does not aim to describe jurisdictions’ early learning and child care (ELCC) policy or provision prior to the CWELCC changes that have began to be implemented. Nor does it reflect changes made under the Agreements and Action Plans or indicate changes in Action Plans other than those formalized in a published Amendment. As a supplementary document to Early childhood education and care in Canada 2021, it is a snapshot of the proposed actions on which the federal government and provinces/territories have reached agreement. ECEC in Canada 2021 will provide data and information both on provinces’/territories’ ELCC policy and provision before CWELCC and on the first phase of changes in these following the CWELCC agreements.

Most of the content in the summary tables comes directly from the provincial/territorial Agreements and Action Plans, some used verbatim. Limited content about jurisdictions’ pre-Agreement practices is included only if it is necessary to contextualize the commitments. For example, if a jurisdiction already had a wage grid in place prior to its Agreement, that information is included. Similarly, information about kindergarten provision is included, as it is relevant to jurisdictions’ ELCC coverage and expansion planning.

The summary, provided in table form, is by necessity less detailed than the full Agreements and Action Plans. Links to each province/territory's documents are included in Table 5 to enable follow-up for further details. Noting that the Agreements also cover other important policy, programme and process issues such as Quality, Inclusion, Indigenous ELCC, Data, Community Consultation, Accountability, the topics summarized in this report comprise Affordability, Auspice, Expansion and the Workforce.