Federal Election 2021: Understanding the parties’ proposals on childcare—what could they mean for your finances?

Each of the three major political parties has promised financial relief for parents with kids in daycare. Financial planners crunched the numbers to show what the platforms might look like for four different kinds of families across Canada.
Author:
Macqueen, A.
Source:
Money Sense
Format:
Article
Publication Date:
26 Aug 2021
AVAILABILITY
Access online

As affordability and the rising cost of living shape up to be significant themes in September’s federal election, all three major political parties have come out with proposals to reduce the cost of childcare for Canadians. How do they differ and what could they mean for you? To help you make your decision at the polls Sept. 20, members of the Financial Planning Association of Canada have crunched the numbers from each of the party’s platforms, and also offer some background.

Canadian parents can already deduct the costs of eligible childcare from their taxable income, in a measure designed by the federal government to make the choice between working and staying home to care for a child more neutral, from a financial perspective.

In families with two income-earning parents, eligible childcare expenses must be deducted by the person with lower income. Each year, that parent can deduct up to two-thirds of their earned income for the year, the actual childcare expenses they paid, or a maximum of $8,000 per year for a child under age seven, or $5,000 per year for a child between seven and 16—whichever is lowest. (There are higher deduction limits for parents of children with a disability or infirmity.)

Reducing taxable income by deducting childcare expenses can also lead to larger benefits delivered through the tax system—such as the Canada Child Benefit, or CCB. The CCB is a tax-free monthly benefit paid to Canadian households with children under 18 and based on the household’s net income (or the total income minus deductions). Technically, the CCB is a refundable tax credit, like the GST or HST credit.

Despite the childcare expense deduction and the CCB, however, many working parents find that their childcare costs are a significant part of their monthly budget when their kids are young—which means it’s no surprise that addressing the affordability of childcare has attracted the attention of the major political parties in their 2021 federal election campaigns.

What are the 2021 campaign promises around childcare?

Here’s what the three main political parties have pledged on childcare affordability:

What could these campaign promises look like for Canadian families?

To explore what the parties’ proposals might mean for Canadian families, Financial Planning Association of Canada members Jason Watt, Lead Instructor at Business Career College in Edmonton, a leader in training for the financial services and insurance industries, and Aaron Hector, Vice President and Financial Consultant at Doherty & Bryant Financial Strategists in Calgary, ran some numbers for four hypothetical Canadian families.

How would these four families fare with $10-a-day childcare or a refundable childcare tax credit?

Based on their current spending on childcare and estimates of how they’d fare with either $10-a-day childcare (the Liberal and NDP platforms) or a refundable tax credit (the Conservative Party of Canada platform), here’s an assessment of how the childcare costs for our four families might change: 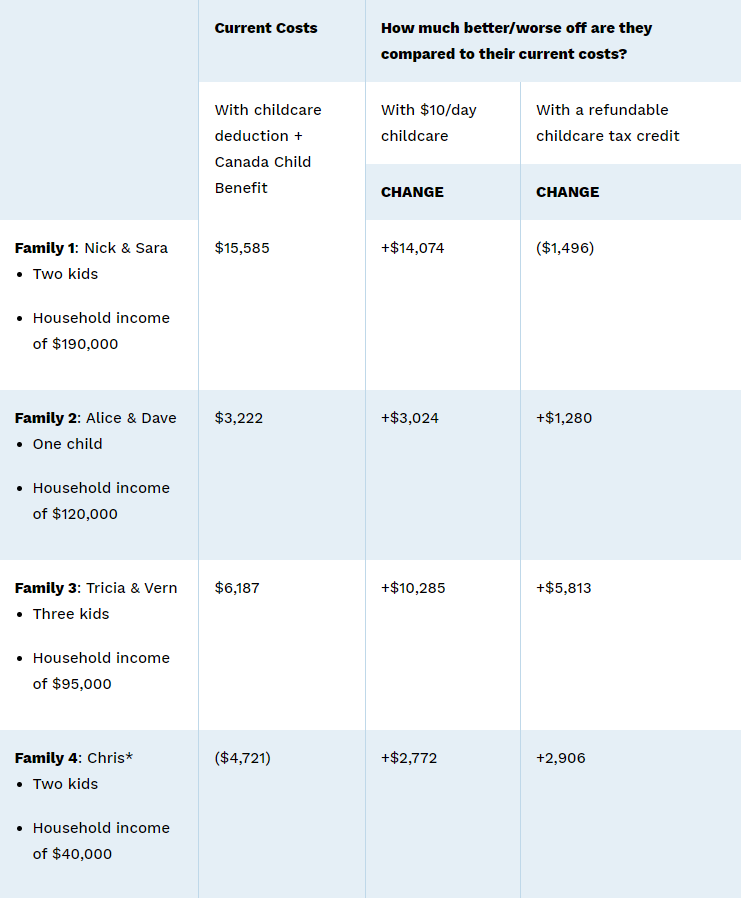 Looking at our table, all four families are better off with a $10-a-day childcare cost, while the highest-income family—which also has the highest current childcare costs—stands to benefit the most. Three of four families are also better off financially with a refundable tax credit, but in that case, the family that stands to benefit most from $10-a-day care is worse off with a refundable tax credit.

While the Liberal and NDP proposals promise to standardize childcare costs at a flat, lowered rate, the Conservative Party’s proposal is more like a coupon that varies in value—which makes understanding the impact on households considerably more complicated.

On balance, both options leave families better off than under the current system, but which option puts more money in your pocket depends on various factors, including the number of kids in your household and their ages, how much you’re currently spending on childcare, and your household income.